3D means three-dimensional. In microscopy (and in most branches of Physics) it does not refer to the subjective perception mechanism that provides humans sense of depth. It is not stereoscopy. It refers to the distribution of a physical magnitude in a volume in space. An image like the following one is not a 3D image, despite it gives a feeling of depth in a volume. It is a 2D projection of a 3D image or dataset. On a regular computer screen this (a 2D projection) is the only way to visualize 3D images. 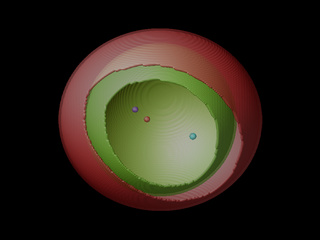