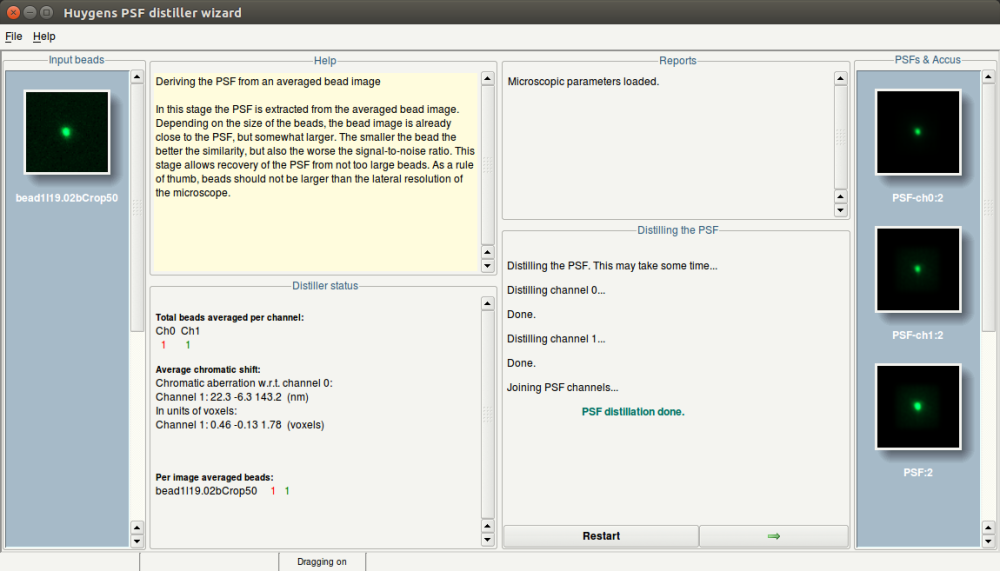 This wizard driven tool guides the user through the process of distilling a Point Spread Function (PSF) from 3D bead images.

Chromatic shift, if present, will be reported by the PSF Distiller wizard, and can subsequently be corrected with the Chromatic Aberration Corrector option.

Quality test for your microscope

The measured PSF acts as a calibration of the microscope in the sense of relating a physical known object (bead) with what the microscope actually measures (bead image).
Pricing Info Download now!

By default, Huygens uses a theoretical PSF to deconvolve your image data, so no extra work is needed. When a deconvolution run is started the theoretical PSF will be automatically calculated from the microscopy parameters and used "on the fly".

Huygens also offers the option to load and use an experimental PSF, and is optionally equipped with the PSF Distiller. This wizard driven tool guides the user through the process of distilling a Point Spread Function (PSF) from 3D bead images. It helps in selecting bead images, and in creating and saving the PSF for further deconvolution runs. The wizard is able to measure a PSF from one or multiple images, each containing one or more fluorescent beads. It is also possible to distill multi-channel PSF's from multi-color bead images, or to assemble a multi-channel PSF from separate single channel bead images PSF's.

Measured PSF's improve deconvolution results and may also serve as a quality test for the different supported microscopes. We advise to measure the PSF after a change in the recording setup and certainly after each maintenance job in which the optics or scanning device was serviced. The measured PSF acts as a calibration of the microscope in the sense of relating a physical known object (bead) with what the microscope actually measures (bead image).

About the PSF distilling

Image formation in fluorescence microscopy can be described by a convolution process with the inclusion of (Poisson) noise. With deconvolution, the aim is to restore the object (unknown) from the measured image through knowledge of the PSF and noise. In the PSF distilling, the object is known, and is modeled as a sphere with a diameter of 20 nm. The PSF is the unknown function in this inverse problem. In the PSF Distiller a non-linear maximum likelihood estimation method is applied, analogue to deconvolution algorithms within Huygens, with the role of the object function and PSF reversed. With the PSF distillation the aim is to find the most likely PSF that generated the measured image. This process is illustrated in the figure. 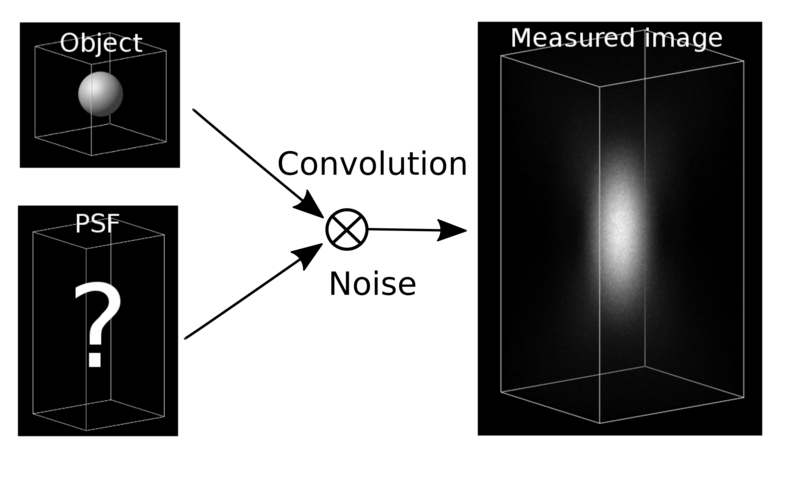 For accurate STED PSF measurement, you need beads smaller than 40nm, and ideally around 20nm in size. Unfortunately most beads of this size are very dim and may photobleach very quickly, making it practically impossible to measure a z-stack for 3D PSF measurement. As an alternative, for STED we advised to use GATTAbeads (GATTAquant GmbH., Germany), which are DNA origami objects folded as nanocubes and are packed with fluorophores. This efficiently creates spherical ‘beads’ with a size of approx. 23nm * 23nm * 40nm. These type of beads have shown to be relatively bright and photostable. In addition, these GATTAbeads can be customized with any type of organic dye and embedding medium, so that it the measured PSF reflects the actual PSF in your sample as best as possible. In the HUYGENS PSF distiller we integrated a robust STED thermal drift correction, which can automatically correct for thermal drift which is often present in STED images. Moreover, at the end stage of the PSF distiller, the user can choose to estimate the STED parameters from the distilled PSF. An advanced iterative algorithm will estimate and fit the best theoretical STED imaging parameters with the distilled PSF, enabling a more robust theoretical PSF estimation that reflects the true imaging situation.

You are always welcome to try out the Huygens PSF Distiller on your microscope images. When you install the Huygens Suite on your computer, also feel free to try out our other products. You can also request pricing information or contact us for more information about the options best suited for your hardware and image processing needs. 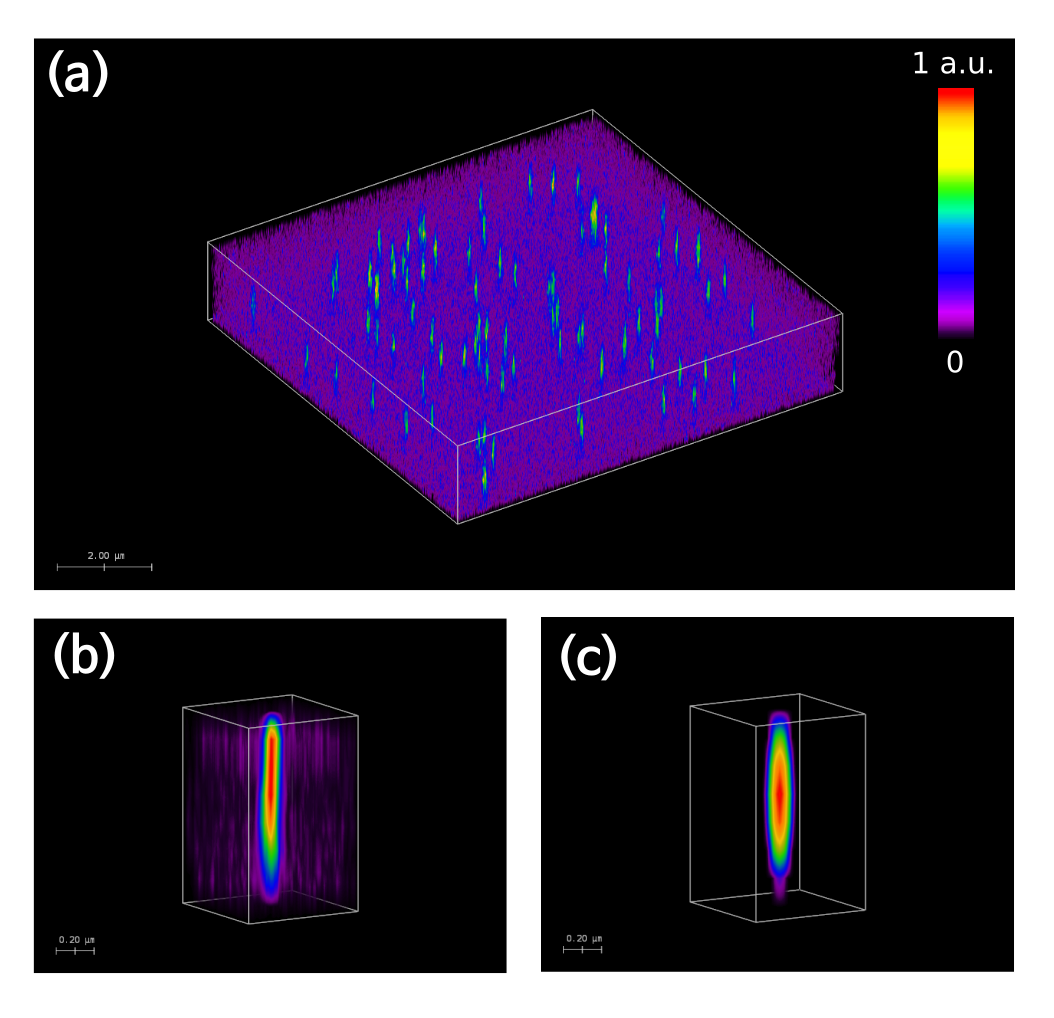 Steps involved in PSF distilling. The Huygens PSF distiller can handle images that contain multiple beads (a). The distiller automatically selects the best beads by taking into consideration the size and separation of the objects in the images. These selected images are then accumulated (b). The accumulation process creates an average bead with higher SNR value which is beneficial for the distilling process. The distiller uses a non-linear algorithm to distill the PSF from the accumulated PSF. The distilled PSF is centered, normalized and free of noise, such that it can be used directly for deconvolution. All images are 3D MIP renderings in false color mode. 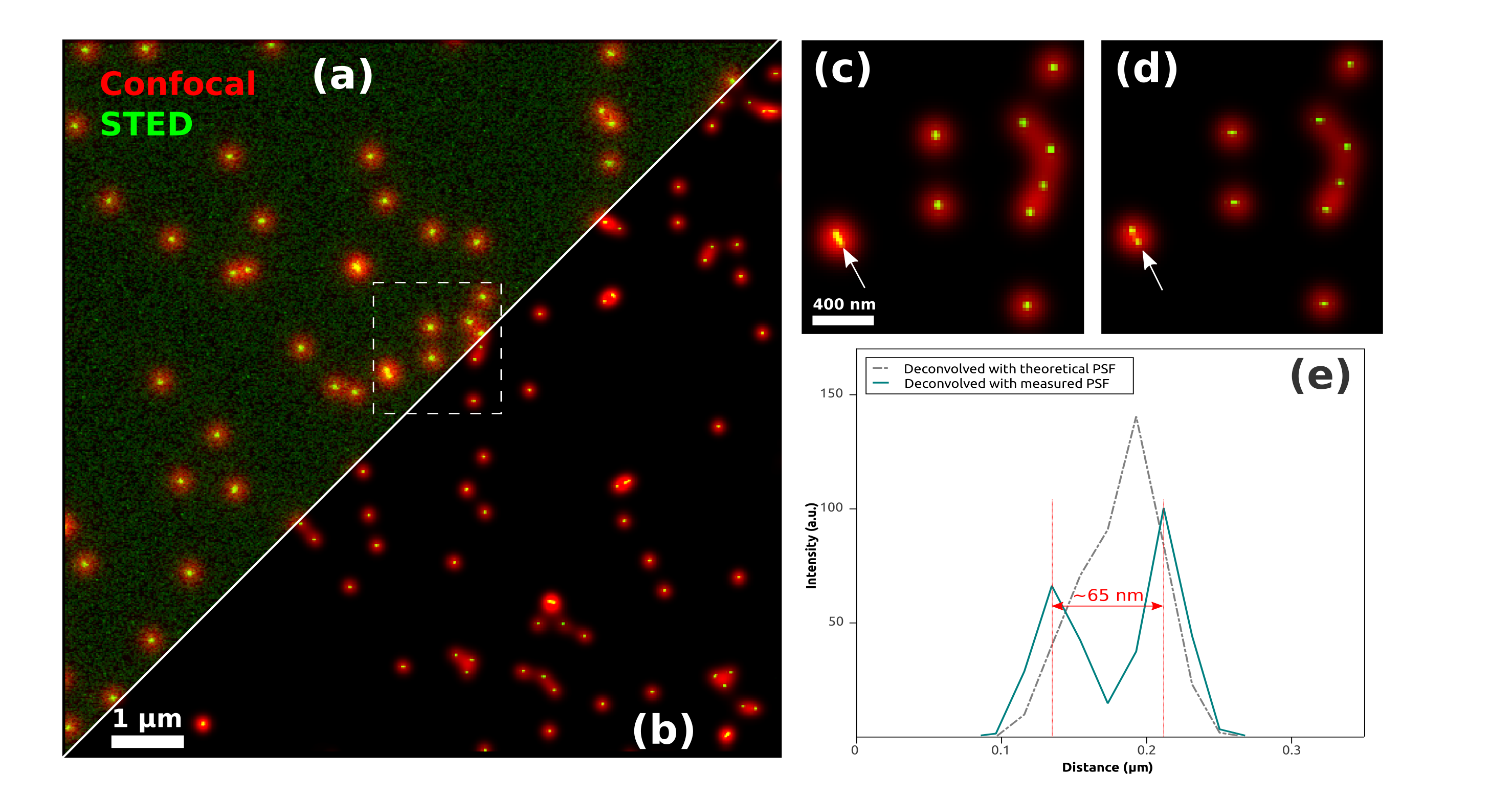