With SVI's Huygens you can work with multiple images each up to 32 channels plus time series. Huygens offers various stand-alone solutions, web solutions and plugins. 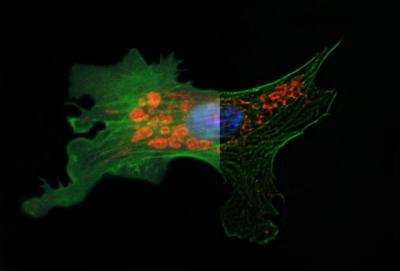 Epifluorescence image of a Bovine pulmonary artery endothelial cell (Invitrogen Floucells #1 prepared slide) deconvolved with an experimental multi-channel point spread function. The before and after deconvolution images were merged side by side to display the power of deconvolution. Courtesy of Drs. Jeff Tucker and Holly Ruthledge, Fluorescence Microscopy and Imaging Center&Microarray Group, NIEHS - NIH, USA.

Beautiful and true images are easily made with a host of visualization tools in Huygens like the MovieMaker, Ortho and Twin slicers, and the Volume, MIP, and Surface renderers. 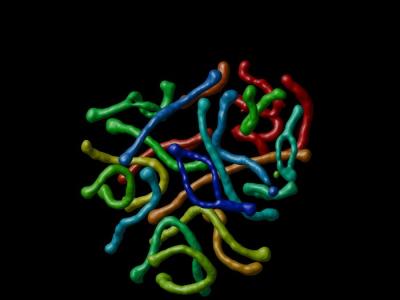 The deconvolution package Huygens Professional also deconvolves via a wizard, or via one single command in the operations window or via Scripting giving a wealth of choices.

Batch processing, included in both Huygens Professional and Huygens Essential, gives you the opportunity to deconvolve large batches automatically and to schedule them easily for a time when the work load of your system is low.

Doing deconvolution via the web for up to hundred(s) users? No problem with Huygens Core working as a powerful compute engine using web oriented interfaces like HRM. Made for and by biologists and physicists working on a day to day basis in image facilities you'll get exactly what you need.

SVI's restoration, visualization and analysis tools enable our customers to obtain and publish high quality results from nearly all types of microscopic images. Our products are used by researchers and scientists worldwide.

"Our Huygens Software is developed with the firm belief that reliable image processing is key in understanding the true nature of microscopic objects. For more than 25 years, we collaborate with expert microscopists around the globe to promote best imaging practices, and to further improve the user-friendliness and quality of our light microscopy software. Together with our extensive online documentation and high level of personal support we strive towards the highest standards of scientific quality, thereby contributing to a community of researchers united in their devotion to pursuit truth and knowledge." 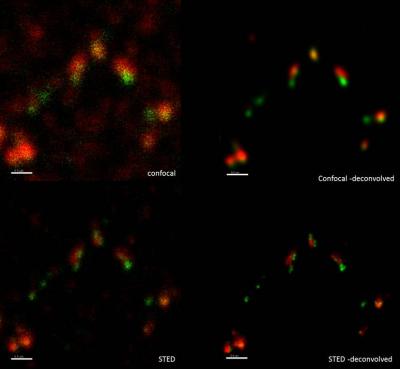 In June 2012 SVI entered the super resolution field by announcing the new Huygens STED deconvolution. The above picture depicts a comparision of confocal and STED images, before and after deconvolution with Huygens. Signal shows regulatory proteins Dmc1 and Rad51 for DNA repair during homologous chromosome recombination in meiosis. Dmc1 shown in green: Mega 520 - 532/685 for ex/em and 770 for depletion. Rad51 shown in red: Atto 647 640/685 ex/em and 770 for depletion. Courtesy of Dr. Juraj Kabat (Biological Imaging Facility, NIH/NIAID, Bethesda, USA).

Scientific Volume Imaging (SVI) was started in 1994 by Dr. Hans van der Voort who is also nowadays one of the driving forces behind the Huygens software.

As deconvolution was still a novel field at the beginning of the nineties of the last century, SVI's clients were often pioneers in imaging in life-sciences. The software was developed for them and with them as their comments and requests were leading in the development of Huygens. This tradition is still kept sacred at SVI and will be upheld in the future.

Huygens Essential was introduced in 2000 so that also the novice user could deconvolve image stacks very easily. It soon became a great success as deconvolution suddenly became an easy matter.

Since 2003, next to its long-standing experience in deconvolution on many different platforms, SVI took major steps into adding visualization and analysis software resulting in a full solution for questions microscopists may have.

In 2012 SVI entered the super-resolution microscopy field by adding STED deconvolution to Huygens, allowing its users to get even better images far beyond the traditional diffraction limit.

SVI continues working closely together with pioneering groups in imaging and biological science throughout the world, both directly and in various daring imaging projects partly funded by Science Foundations and the European Union. Results from those fruitful cooperations can be found throughout all SVI software. Here you find an overview of completed and still ongoing projects.