Besides blurring, noise, and spherical aberration - which can be effectively corrected by deconvolution - there are other major factors distorting image quality. Below you will see the available Options and Tools for both:

Each Deconvolution option is specifically designed to take into account the optical properties of that type of microscope for Deconvolution:

For other major factors distorting image quality like Instability, Chromatic Aberration and Cross Talk we have developed the following Restoration Options and Tools:

Huygens PSF Distiller option is a wizard guided option that can be used to obtain an experimental or distilled Point Spread Function (PSF) from acquired single and multi-channel bead images. A screen shot of the wizard is shown below. Chromatic shifts will be automatically reported and can be corrected by the Chromatic Shift Corrector. 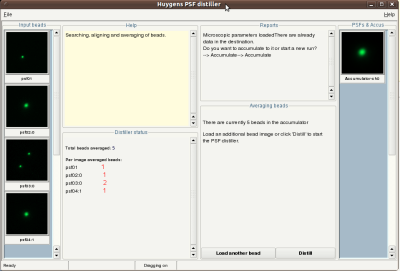 Performance Option: Standard included in Huygens for using up to 16 CPU cores (32 logical when hyper-threaded) and 1 Small GPU card.

To accelerate Huygens by using NVIDIA GPU cards, an additional license option may be needed. A detailed table of GPU cards and corresponding required license options can be found here. For cards not in the table, the following rules apply:

More information about Huygens and GPU acceleration can be found on the HuygensGPU wiki page.

Our software can make optimal use of the number of CPU and GPU cores in your hardware (see under 'CPU/GPU Options'), and is based on cross platform technology which makes SVI one of the few software companies in the microscopy field that have their software available on Microsoft Windows, Apple Mac OS X and Linux. All our applications have the same look and feel on all platforms, except where the differences are created by the window manager of the operating system that is being used. For a comparison of speed of deconvolution with Huygens on various hardware configurations and platforms (Linux, Mac and Windows) you may want to have a look at the benchmark results.
The hardware that is recommended below represents the minimum requirements. Please contact us for more detailed advise.