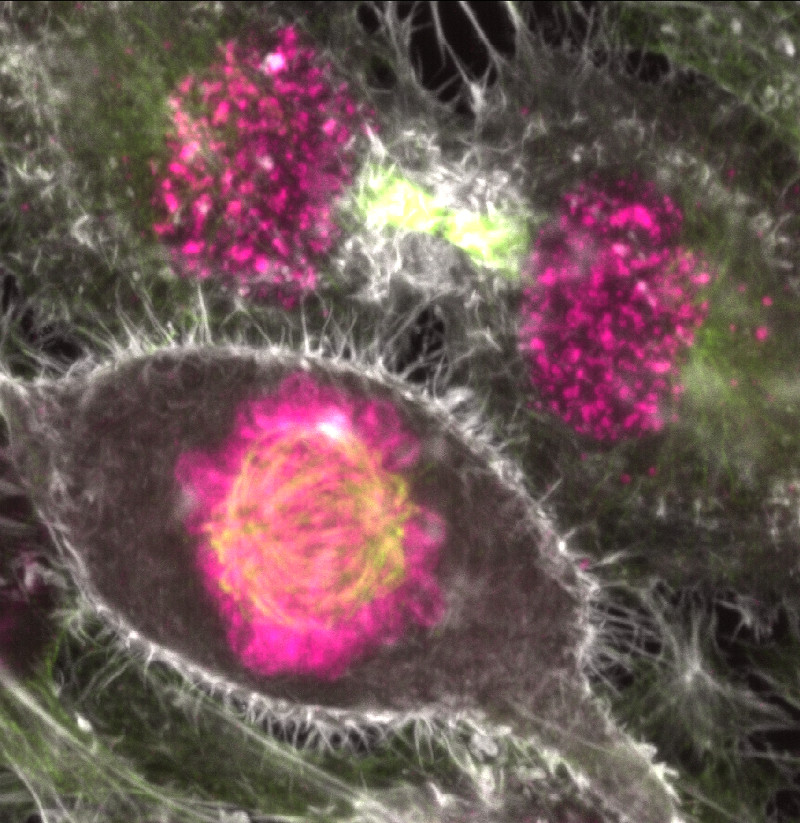 Confocal
Huygens Deconvolved superXY
Multi-detector confocal images profit from the high-signal of a large pinhole and high-resolution aspect of a small pinhole, however each detector has a slightly shifted version of the central detector image and thus the final image is still a blurred compromise. Using Huygens revolutionary Array Detector deconvolution, unprecedented high contrast and resolution can be achieved as the position information of each individual detector is integrated in Huygens' famous maximum-likelihood estimation (MLE) framework.

Huygens MLE-based and GPU accelerated algorithms work with any array detector confocal system, including the popular Zeiss Airyscan 1 and 2, and allow scientists to obtain reliable and quantitative super-resolution images in which objects at 70nm and 90nm distance can be clearly distinguished (see below).

Importantly, Huygens unique Array Detector Super-Sampling mode for both Airyscan and FastAiryscan, allows you to scan images much faster while still being able to improve image resolution and contrast beyond what has been possible sofar. Less bleaching and photo-toxicity and more image detail, a wish of many biologists come true.

Tests with a range of GattaQuant nanorulers confirm 90nm two-point resolution is achievable.

We are quite impressed with the Huygens Array Detector results.

Dr. Glyn Nelson, microscopist in the Bioimaging Unit, Campus for Ageing and Vitality, Newcastle University, UK.
Huygens array detector deconvolution has allowed us to improve the resolution of Airyscan images beyond their normal limits.

A wish of many microscopists comes true: Get more resolution and image faster using Huygens Super-sampling mode. This unique deconvolution mode makes the Nyquist criterion for array detector imaging much less strict, because the intensity and precise position information of all detectors is efficiently combined by Huygens to create a super-sampled deconvolved image. You can image now at a much higher speed using a larger pixel size and still improve resolution up to the level of distinguishing objects that are only 70nm apart. Obtain significantly better image quality, image a larger field of view, and decrease photo-bleaching and -toxicity drastically with Huygens Array Detector deconvolution. 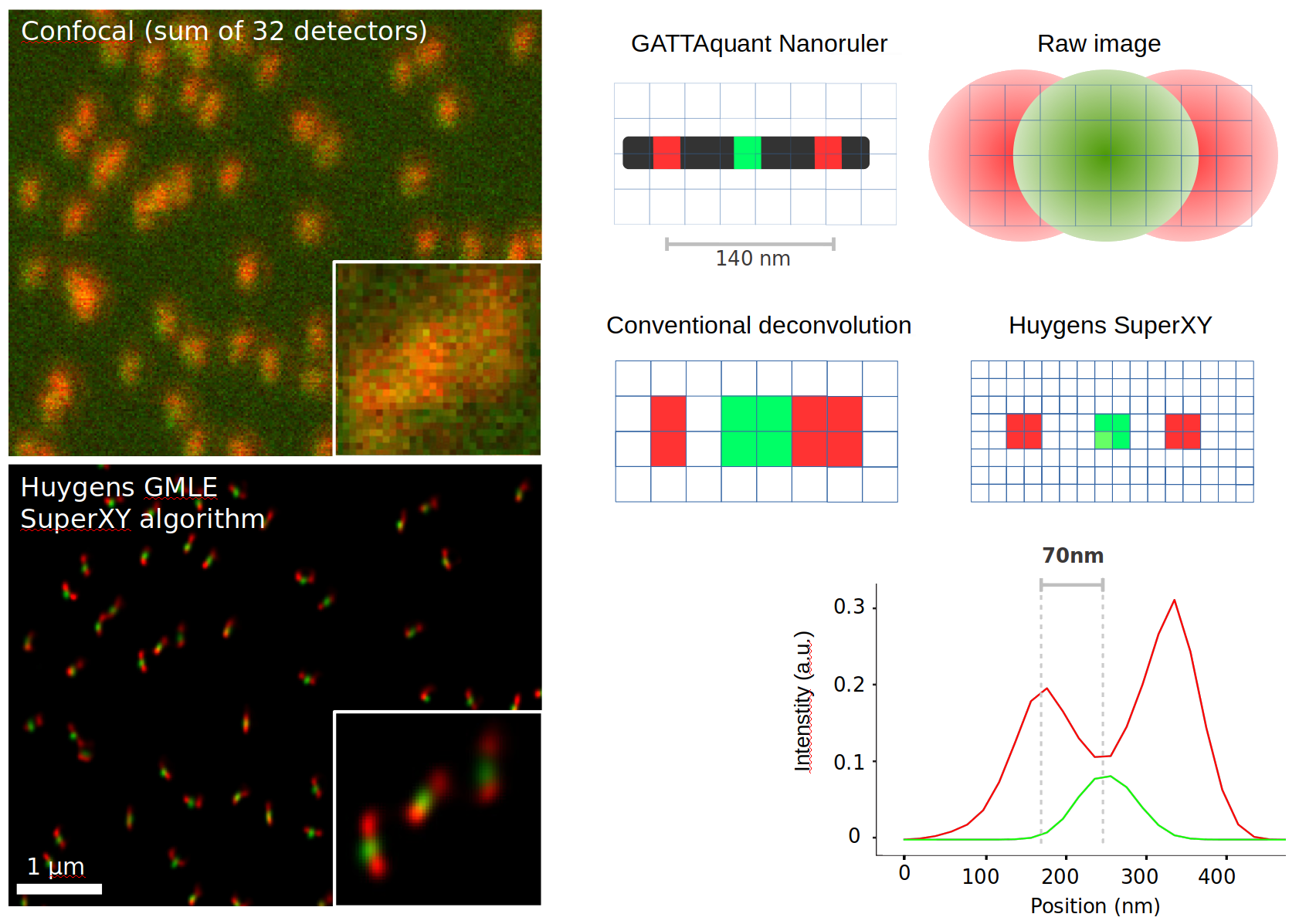 Huygens unique SuperXY mode clearly separates objects that are 70 nm apart. This two channel image of GATTAquant SIM140BYB nanorulers was acquired with the Zeiss Airyscan Fast Mode at 27 nm xy pixel size, which would not be sufficient to resolve 70nm spaced objects. By making optimal use of the signal and precise positiono information of all detectors in the Array, Huygens deconvolution is able to create a super-sampled image. Microscopy data was kindly provided by Dr. Christoffer Lagerholm (Wolfson Imaging Centre, Weatherall Institute of Molecular Medicine, University of Oxford, UK

Huygens' unique MLE deconvolution uses the information available from the array of detectors to reach a clear 90nm two-point resolution. 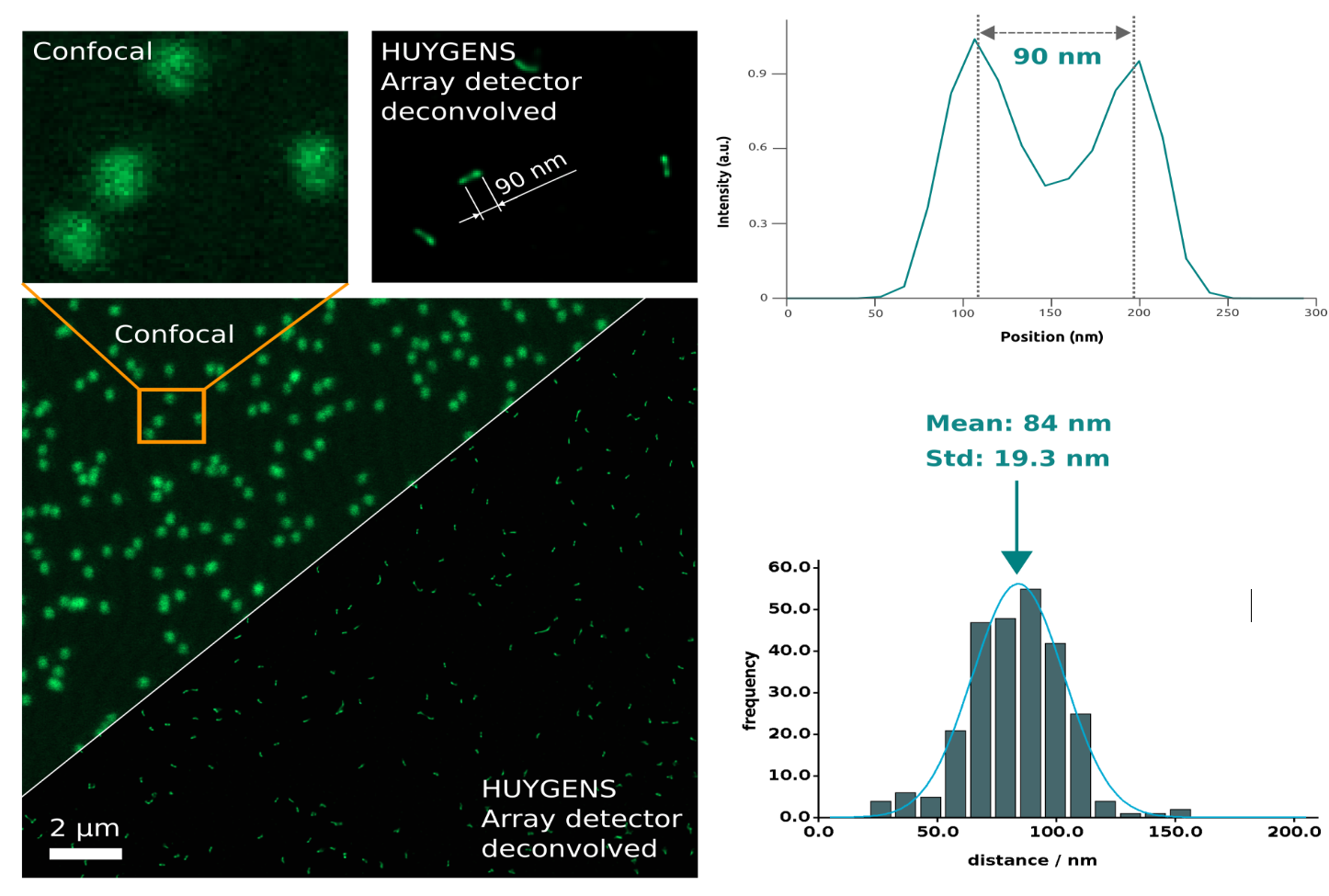 Because of its fast imaging and low phototoxicity and bleaching, Array Detector microscopy is well fit for live-cell imaging. Huygens can then be used to stabilize time series and to track object movement over time. 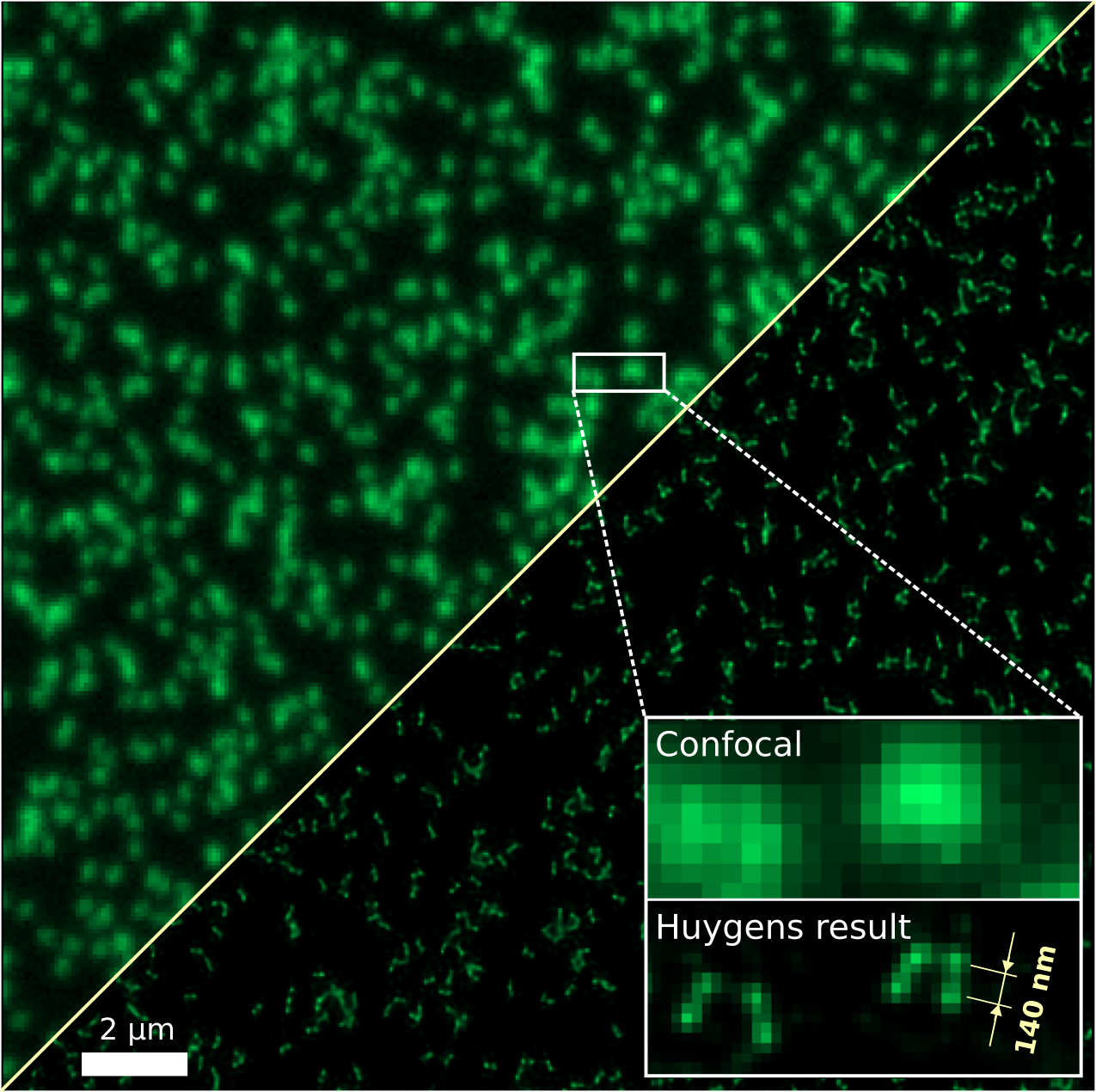