Gamma correction, or often simply gamma, is the name of an internal adjustment applied to compensate intensities in imaging systems. Output intensity \(I_{out}\) is related to the input \(I_{in}\) by the following expression:

where the input intensity is normalized to one. Independently of the value of gamma the highest intensities remain relatively unchanged, while lower intensities are relatively modified.

For gamma values larger than one, dimmer intensities are enhanced relatively to the higher ones. 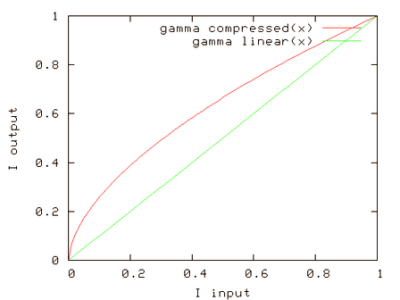 
You will find five different gamma modes in the Huygens (twin) slicer under the 'Contrast' tab: 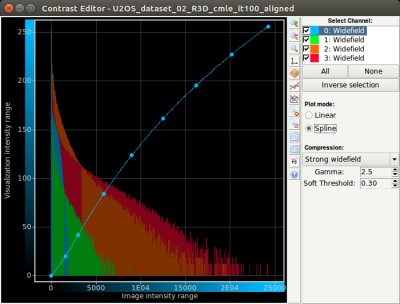 The higher the gamma value the more the lower intensities will be boosted. This makes sense as after deconvolution the intensity increase can be easily three- to four-fold (if not much more). So a deconvolved image may seem to have lost the dimmer objects when you choose the linear gamma presentation. By choosing the a higher compression value these dimmer objects will be visually enhanced and become more visible.

By clicking on the small contrast icons you will enlarge them immediately so that you can still alter the gamma and also the svi.nl/SoftThreshold which prevents sharp transitions in the lower values and usually gives a slight decrease.

These modes map logical intensities from the dataset to the screen but it's good to know that nothing changes in your dataset, whatever your choice of representing it in any of the visualization tools in Huygens.

Usually the screen on your monitor has again an extra gamma correction as a screen monitor rarely has a gamma of one. Mac screens usually have 1.8, while Windows PC's use 2.2.