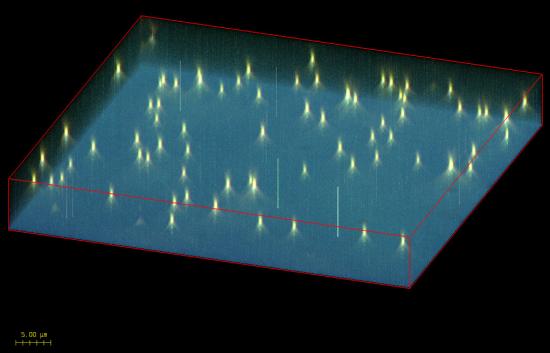 Huygens MIP rendered projection of a raw 3D widefield stack image of 100nm multicoloured beads (TetraSpeck - Life Technologies). Hot pixels are clearly seen as stripes of high intensity values preserved in the axial dimension. Note the blurring cones of the beads and the misalignment of the different channels, which becomes more obvious after deconvolution of this raw image


Hot pixels are produced by individual sensors on the CCD camera with higher than normal rates of charge leakage. They appear as abnormally bright pixels of light on long exposed images. In fact, all pixels on a CCD detector have some charge leakage. If you would expose long enough, any pixel would light up. This charge leakage is worse at higher temperatures. Also, increasing the gain would increase the appearance of hot pixels.
Hot pixels may appear at the same position in every z-slice of a 3D stack, in every time frame, and in multiple channels.

Huygens Essential and Professional have a Hot & Cold Pixel Remover, which is a tool that can automatically detect, visualise, and correct hot pixels.