Mac OS X is a series of Unix oriented operating systems developed by Apple Inc., providing Aqua as its native graphical user interface (GUI), including its Mac look-and-feel buttons, windows and other widgets.

Apart from Aqua, Mac OS X can also support other more portable user interfaces based on X11, to run applications that may look less Mac-like, but that are easier to port to other platforms. Huygens is only available in Mac as an X11 application, and therefore your need to have X11 installed on your Mac in order to run Huygens.

Installations on Big Sur are running fine. Huygens can also be used on the Apple silicon m1 CPU with the use of the Rosseta 2.

Installations on Mojave and Catalina are running fine. In rare cases Huygens will not start which is caused by an error in the permission settings (see above).

The latest version of XQuartz can be downloaded from here.
When you install XQuartz for the first time, there should be no problem running the latest version of Huygens.
If you have upgraded to Yosemite, El Capitan or Sierra from a previous Mac OS and had XQuartz previously installed, then the upgrade causes the symbolic link to the X11 directory to break. This is a known issue with the Mac OS upgrade. Because Huygens depends on X11 in Mac, Huygens will not be able to run at first.
The easiest solution is to first un-install XQuartz from your Mac and then re-install XQuartz.


Up to a few years ago we supported two Mac versions of the Huygens software. One version used the native Mac OS libraries for showing the graphical user interface, this is the ‘Aqua version’ of the Huygens suite. The second version uses an OS independent library for showing the GUI, this version requires XQuartz (an X11 version for Mac OS X officially supported by Apple) and is referred to as the ‘X11 version’ in our documentation.

Therefore the current Huygens release, only supports the X11 version, the Aqua version no longer supported. As a side benefit, this resulted in a performance and stability boost for the new Huygens version!

To be able to run the latest version of Huygens, you will need an X11 server on your machine. If you currently do not have an X11 server, you can install XQuartz, which is freely available and the preferred X11 server for Huygens. The installation should be straightforward.

In order make optimal use of the Huygens software, we recommend setting the xQuartz X11 preferences to send Alt key symbols when pressing the Option key. This allows you to expand the usability with Alt hotkeys on Mac OSX. 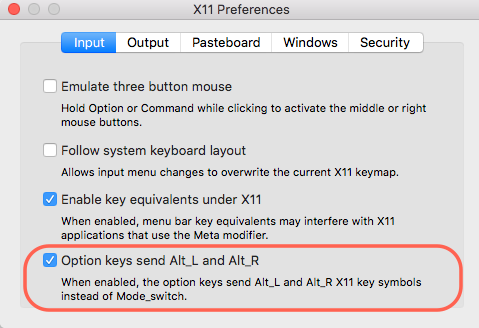 Another option for using the Huygens software on the MacOS 10.7, 10.8 and 10.9 is to run it under Windows/Linux in Boot Camp. More information can be found here