A lens can collect more light the bigger it is (that is the angular part of the above equation: α is the angle subtended at the focus by the lens radius).

(The refractive index appears in the definition as a scaling factor. In this way, the NA determines the Spatial Resolution also scaling the wavelength of the light.)

Because sin(α) ≤ 1.0, the NA is always lower than the medium refractive index. If a 1.4 NA oil immersion lens is used to image into a watery object Total Internal Reflection (TIR) will take place, effectively truncating the aperture (see Acquisition Pitfalls). 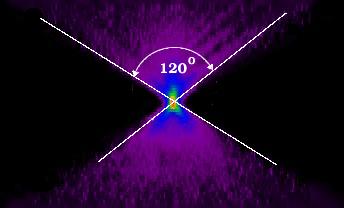