Chromatic aberration gives misalignments and scaling differences between different colors in a microscope image. It can be caused by the physical properties of the used lenses, by misalignments in the microscopy set-up, or by a combination of both.

Light moves differently through different media. As a result, light beams bend as they pass from one medium to another. This bending is called refraction and the media are said to have different refractive indices. The refractive index of a medium depends on the wavelength of the light that passes through it, so that different colors are bent differently.

Refraction lies at the basis of light microscopy: light from a sample is bent by a lens, focusing it in the focal point. Because the refractive index of the lens depends on the wavelength of the light, different colors are focused to different focal points. The result is what we call chromatic aberration, where a multi-channel image is blurred and misaligned.

In addition to these two types of chromatic aberration induced by lens properties, problems may be caused by the coverslip, the Lens Immersion Medium, the Specimen Embedding Medium, or by the microscope having misaligned light paths. As a result, different channels may be shifted with respect to one another, show different scaling, and exhibit rotational misalignment.

The total chromatic aberration in a microscopy image is typically caused by a combination of the physical properties of the used lens and the limitations of the microscopy set-up: initial misalignments between light beams are exacerbated as they move through the lens(es). 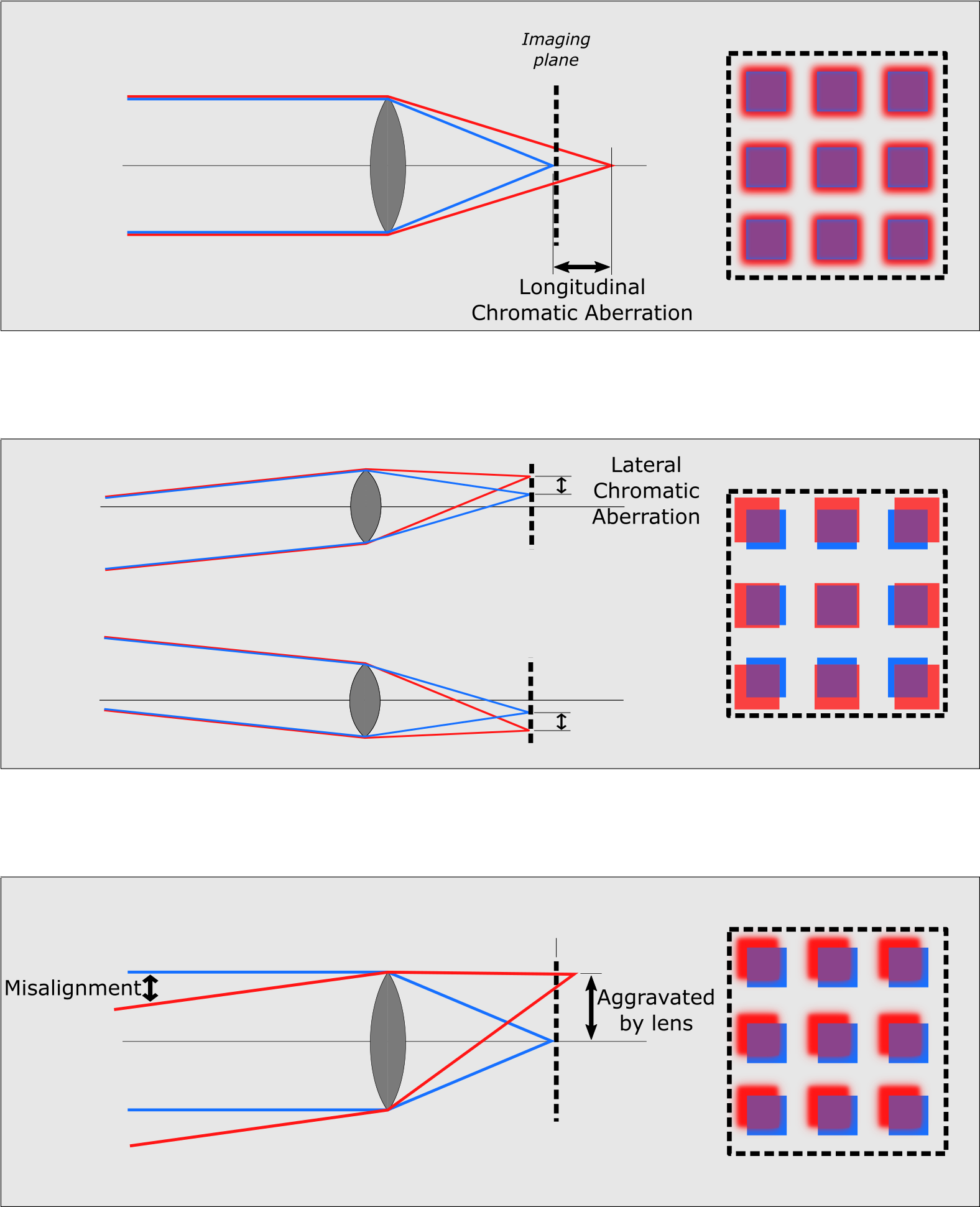 To minimize chromatic aberration caused by the wavelength-dependent refractive index of the lens, many microscopes are equipped with achromatic or apochromatic lenses. While these lenses are effective in reducing longitudinal aberration, they are typically optimized for only a limited range of wavelengths and they do not account for lateral aberration. In addition, these corrective lenses do not address aberration induced by factors other than the lens refractive indices. Misalignments between different light beams, for example, are not dealt with, and the lateral aberration by the lens still amplifies the related aberrations in the image.

Because many factors causing chromatic aberrations in microscopy images are not addressed by achromatic or apochromatic lenses, post-acquisition correction is typically required.

The Huygens Chromatic Aberration Corrector can automatically estimate and correct for any xyz shifts between channels, scaling differences and rotational misalignments. For optimal correction, the Corrector can be calibrated using bead images. The shifting and scaling parameters estimated from these known objects can then be used to correct images of biological samples.

Chromatic shift is automatically reported by the Huygens PSF Distiller when distilling a Point Spread Function (PSF) from bead images. This reported value can be used to correct the shift in the Chromatic Aberration Corrector.

Workflow for the Huygens Chromatic Aberration Corrector. For calibrated correction, the user can first use the Corrector to estimate the aberration parameters from bead images. These parameters can then be used to correct for chromatic aberration in the actual image.