The Huygens' Principle (after Christiaan Huygens) states that the wavefront of a propagating wave of light at any instant conforms to the envelope of spherical wavelets emanating from every point on the wavefront at the prior instant. 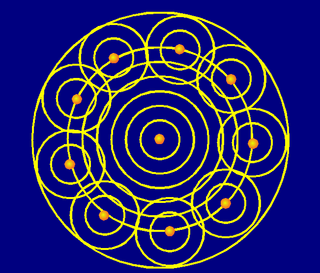 In this image a punctual light source in the center emits radiation symmetrically in all directions. The wavefront is therefore a sphere in 3D, despite here only 2D cuts are plotted. At every instant, the sphere excites each point of the space it reaches (here only a few are drawn, for simplicity) which act themselves as secondary sources of radiation. An instant later, the global wavefront is the envelope of all these secondary virtual wavelets. This envelope is again a sphere of larger size, and thus the wavefront propagates as a sphere of increasing size that expands from the center.

Fresnel elaborated on Huygens' Principle by stating that the amplitude of the wave at any given point equals the superposition of the amplitudes of all the secondary wavelets at that point. This does not refer to envelopes anymore but to interfering waves, but the idea that virtual secondary sources are excited at each point of the space is the same.

This way of looking at waves is simplified (i.e. not completely correct!!!) but useful for some purposes: see Image Formation.