An isosurface is a 3D surface representation of points with equal values in a 3D data distribution. Is the 3D equivalent of a contour line.

An isosurface can be used to represent, for example, all VoXels in an image with a given CoLocalization level. Those points are joined forming a 3D surface. It might happen that the surface is split into several disconnected parts: they become objects than can be analyzed independently.

You can also understand an isosurface by seeing how it is calculated. The 3D dataset is first thresholded at a certain level. The iso-surface is the surface that envelops the remaining VoXels. If those voxels are distributed in groups that are not spatially connected, you actually obtain many different non-connected surfaces. (Every group of connected voxels can be labeled as an independent object). An isosurface is therefore the (multi)surface that envelops all those objects. All voxels enclosed by that surface have intensities above the threshold. 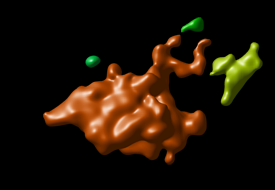 A refinement of the isosurface is that it is not just the collection of all outer surfaces of voxels above threshold, but rather a smooth surface through
all points between the voxel locations which have an interpolated value equal to the threshold value. The ray-tracing algorithm used in Huygens modules like Surface Renderer and Colocalization Analyzer computes for each ray the exact intersection and intersection angle with this smooth surface.

Left: An iso-data contour for an interpolated value of 5. Because 5 is much closer to 6 than to 12, the distance of the contour to the voxel with value 12 is larger than the distance to the bottom-right voxel with value 6. Middle: Surface normals determine the shading of the surface. If the surface is partly transparent the green object also becomes visible. Right: Bottom half of the semi-cube is composed of voxels with value 60; upper part of voxels with value 100. Surface at 50. Note the rounded corners, and the slightly larger width of the upper part.

Read more on the Wikipedia.