Simulated Fluorescence Process (SFP) is the computing algorithm behind the Huygens SFP Renderer. By modeling a physical light / matter interaction process an image is computed showing the data as it would have appeared in reality if it was made up of fluorescent materials, and if its size was on a 'human scale'. 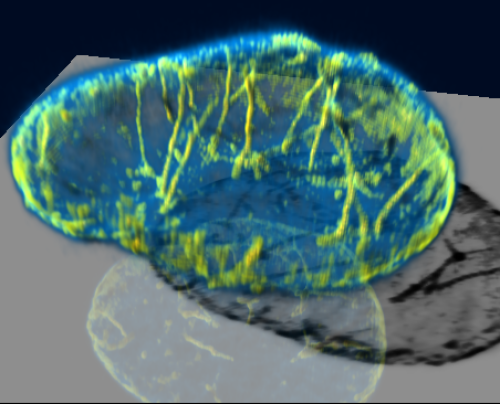 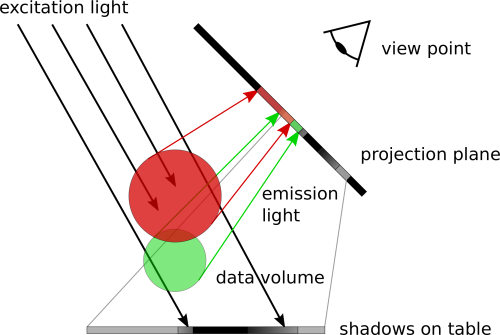 In the SFP Renderer excitation of and subsequent emission of light by fluorescent materials is simulated. Each subsequent voxel in the light beam is affected by shadowing from its predecessors. The transparency of the object for the emission light controls to what extent the viewer can peer inside the object.

The VoXel values in the image are interpreted as the density of a fluorescent material. If the voxels are Multi Channel each channel is interpreted as a different fluorescent dye. Each dye has its own specific excitation and emission wavelength with corresponding distinct absorption properties. The absorption properties can be controlled by the user. The different emission wavelengths give each dye a specific color.

To excite the fluorescent matter, light with a given Excitation Wavelength must traverse other matter. The resulting attenuation of the excitation light will cause objects, which are hidden from the light source by other objects, to be weakly illuminated, if at all. The attenuation of the excitation light will be visible as shadows on other objects. To optimally use the depth perception cues generated by these shadows a homogeneous plane (the gray table) is placed below the data volume on which the shadows are cast.

After excitation the fluorescent matter will emit light at a different Emission Wavelength (longer than the Excitation Wavelength if the number of Excitation Photons is just one). Therefore the emission light can not re-excite the same fluorescent matter: multiple scattering does not occur. Thus only the light emitted in the direction of the viewer, either directly or as reflected by the table is of importance. By simulating the propagation of the emitted light through the material, the algorithm computes the final intensities of all wavelengths (the spectrum) of the light reaching the viewpoint.

The Sfp Renderer has many optional parameters that allow for full control over the SFP process:


A fast GPU implementation of the SFP algorithm is available as from Huygens 19.04. If a GPU is available and has sufficient on-board memory it is automatically used, otherwise processing will fall back to the CPU.