(SHG; also called "frequency doubling") is a nonlinear optical process, in which photons interacting with a nonlinear material are effectively "combined" to form new photons with twice the energy, and therefore twice the frequency and half the wavelength of the initial photons. (Wikipedia).

SHG microscopes are Non Linear systems because the emitted light is coherent. Due to that coherence, the signals arriving from different points may interfere with each another, which hampers deconvolution. So one must be very careful with the interpretation of the results if nonlinearity is present but linear convolution is assumed in the Image Formation. DeConvolution is meant for linear optical systems. 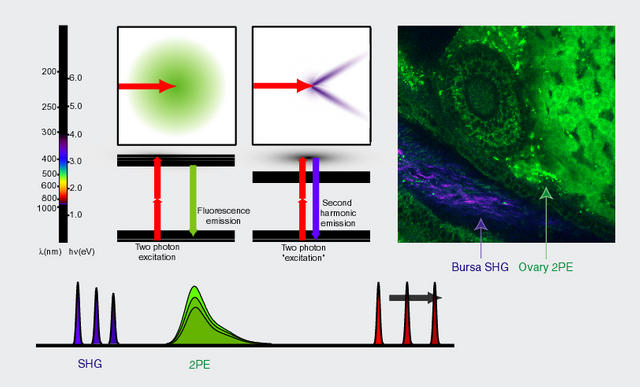 In harmonic generation, multiple photons interact simultaneously with a molecule with no absorption events. Because n-photon harmonic generation is essentially a scattering process, the emitted wavelength is exactly 1/n times the incoming fundamental wavelength. When the excitation color is changed, the emission color changes also. In contrast the wavelength of fluorescence emission is Stokes-shifted to a longer wavelength; the line shape is determined strictly by the molecular energy levels. Practically it is relatively easy to design multicolor MPM by tuning the harmonic generation so that it is well separated from the fluorescence (see mouse ovary image above — acquired in collaboration with Alexander Nikitin, Biomedical Sciences, Cornell).

Another major difference is that for scattering microscopies, the emitted light is coherent and therefore must satisfy phase matching constraints. For example, the SHG profile in MPM retains phase information and emits with a directionality dependent on the nature of the scatterers (Moreaux, L., Sandre, O. & Mertz, J. (2000) J Opt Soc Am B 17, 1685-1694. Mertz, J. & Moreaux, L. (2001) Opt Commun 196, 325-330.). Fluorescence in general emits isotropically.


From Frequency doubling, Encyclopedia of Laser Physics and Technology

Definition: the phenomenon that an input wave can generate a wave with twice the optical frequency

Crystal materials lacking inversion symmetry can exhibit a so-called `7;(2) nonlinearity. This can give rise to the phenomenon of frequency doubling, where an input (pump) wave generates another wave with twice the optical frequency (i.e., half the wavelength) in the medium. This process is also called second-harmonic generation.


... The Olympus Fluoview/BX50WI microscope can also be modified with a minimum amount of effort to have the capability to acquire images of SHG, either from special chromophores (11, 19) (20) et al 2001, Kobayashi et al 2002) or from endogenous structures in biological tissue such as oriented collagen fibers (21). SHG, which like two-photon fluorescence is a nonlinear optical effect, is gaining recognition as an important mode of microscopy that allows biological researchers to probe a cell s trans-membrane potential (10) and thus monitor the electrical activity of nerve cells (22, 23). Unlike fluorescence, in which emitted photons are best detected with epi-illumination, SHG photons, which result from coherent scattering, are best detected in the transmission path of the microscope. One might think of the process, in simple terms, as the partial conversion of stimulating light (the IR beam) into an electromagnetic wave at twice the incident frequency (half the wavelength) with a similar bandwidth (actually times sqrt(2) ).

The SHG photons, generated at the focal spot of the laser in the sample, are collected by the condenser lens, which has to be of equal or greater numerical aperture (NA) than the objective lens NA in order to collect the whole cone of light. This is important since the SHG radiation in the forward direction (towards the condenser) is restricted to certain off-axis angles (20). We used the Olympus Aplanat Achromat oil immersion condenser with a variable NA of up to 1.4 (one does not have to use oil for NA values of less than 1). A PMT (Hamamatsu HC125-05) with the appropriate (blue) filter replaced the diffuser and fiber bundle in the auxiliary port (see schematic Figures 1b and 2). This port was originally designed for DIC imaging in transmission mode in the FLUOVIEW confocal scanner.