Clipping during acquisition occurs when the Dynamic Range of the input signal exceeds that of the analog-to-digital converter (ADC). In practice this means that the highest values should in fact be represented by a larger number, or that the lowest values in the input image actually have lower intensities.

Clipping can also occur during data processing when you store data using a file format with lower dynamic range without downscaling properly. For example, if you save a 12 bit image in a 8 bit RGB TIFF format directly, all intensities above 255 will be clipped).

This is an example of a clipped image, where all the inner regions in the objects of interest are saturated to a constant maximum value, and the internal structure can no longer be observed: 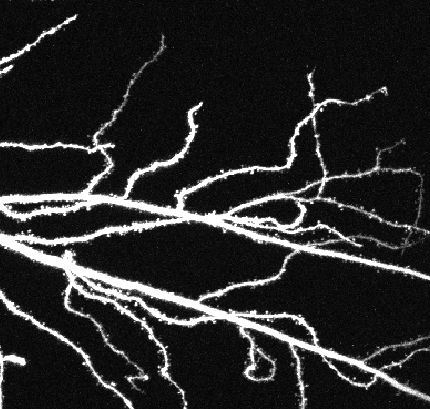 Image (*) courtesy of Dr. T.M. Hoogland, Dept. of Neuroscience, Baylor College of Medicine, Houston. This image shows part of the apical dendritic tree of a CA1 pyramidal neuron in an acute hippocampal slice. The cell was filled with the fluorescent indicator Alexa 594 (100 uM) and imaged with a two-photon laser scanning microscope.

In microscopes equipped with a CCD sensor this conversion is done in the CCD camera and its electronics. Most CCD cameras have an 12-bit converter limiting the output numbers to a range of 0 to 4095. Negative input signals are usually converted to 0 while positive input values exceeding some value are all converted to 4095 (clipping): information in the clipped samples is lost.

In scanning microscopes the electrical signals are usually generated by a photo multipliers and amplified by similar circuits as outlined above. In older microscopes the signal is often digitized by 8-bit ADCs; more modern systems are equipped with 12 bit ADCs.

Clipping can be understood as a saturation of your detector.

In a Fluorescence Microscope image clipping makes all the VoXels with intensity values above a threshold to be read with the same fixed intensity. It is impossible to later reconstruct what were the real intensities of those voxels.

It is like taking a picture of a mountain leaving its top out of the image: you can not say any longer what was its real shape, or its real size, just by inspecting the imaged lower part. What is the real profile of this mountain? 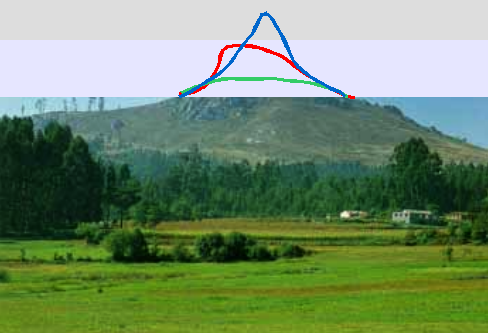 Usually, the clipped voxels are in the regions of most interest of the images, in the brightest features of the samples, like in the first image above. That is why avoiding clipping is so important.

In practice: be suspicious if you find values at the extremes in your image, probably clipping occurred. If you were using averaging in a scanning microscope, clipping might also have occurred in some of the samples prior to the (digital) averaging. This leads to a quenching-like effect and less effective deconvolution.
During acquisition, clipping can be prevented by using the proper offset and gain settings. Most microscope acquisition software packages have a tool that can help you to determine the most optimal settings. This tool is often referred to as the "Range Indicator" or "Color range indicator".

The Image Histogram of a well measured image goes to zero, showing that all the information is properly recorded inside the Dynamic Range (right). A clipped image on the other hand does not go to zero (left): 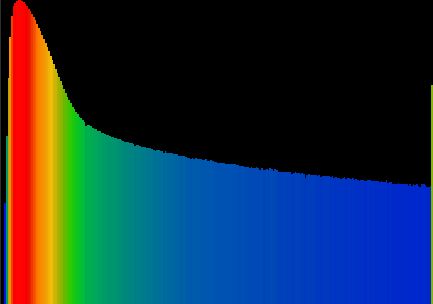 The amount of pixels with a given intensity decreases when going to high intensities (the right of the histogram), but not fast enough to go to zero before the detector is saturated. There are a lot of pixels with real intensity higher than the maximum, that are "collapsed" into the maximum intensity allowed in this Dynamic Range. (This is represented in the last value of the histogram with a one-pixel width green bar. This is a log-lineal histogram, so double-height is much more than double-amount of pixels) 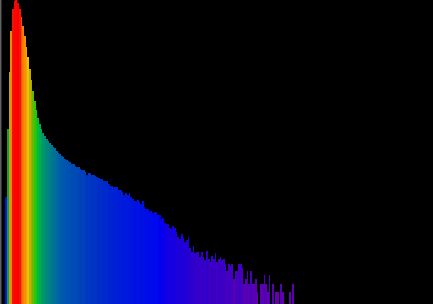 In this case, a large part of the available Dynamic Range is not used at all. As perfectly fitting the Dynamic Range to the real intensities may be tricky, it is always better to be conservative and waste some of it that incurring into clipping. 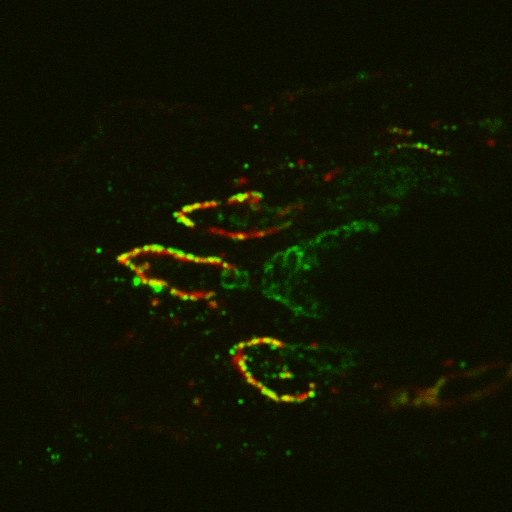 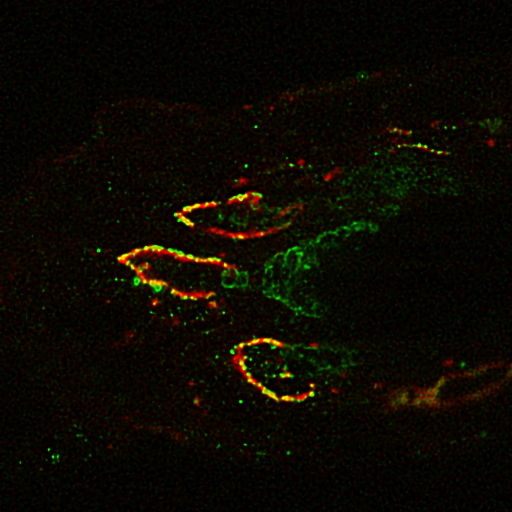 The restored image was deconvolved with an overestimated Signal To Noise Ratio (SNR), and some artifacts appear in the background, but we will not examine that here. It is detailed in the SNR article.

What is relevant now is these green hollow structures in the center of the image:

They are restored as hollow objects, but very probably this is just an artifact resulting from deconvolving a clipped region. In these objects and others in the surroundings, the original intensities are clipped (saturated) and therefore deconvolution can not find a realistic solution, specially in a single 2D slice. The mathematical solution of such a flattened feature is a hollow object!