The resolution of optical microscopy is physically limited. This fundamental limit was first described by Ernst Karl Abbe in 1873 [1] and although no equations were mentioned in this paper, Abbe reported that the smallest resolvable distance between two points using a conventional microscope may never be smaller than half the wavelength of the imaging light. In some of his later papers he derived that as a result of diffraction, the imaging resolution was limited to half the wavelength λ modified by the refractive index n of the medium and the angle θ of the cone of focused light:

The numerical aperture (NA) and the resolution limit is schematically illustrated in figure 1. The limit is basically a result of diffraction processes and the wave nature of light. The high frequency components that give an image its sharpness are lost by the finite numerical aperture of the lens that collects the light. This results in a blurry appearance of the captured image. In more mathematical sense it can also be said that the resulting image is a convolution of the actual object with the so-called point spread function (PSF) of the optical system. The PSF is the response of an optical system to a point emitter due to the diffraction limit and imperfections in the optical system. In a perfect optical system without any aberrations, the PSF is well-described by the so called Airy function. As a result of the diffraction limit, two emitting points cannot be optically resolved if the distance between them is smaller than the diffraction limit, which is illustrated in figure 1 (b). This definition of microscope resolution is also often referred to as the Rayleigh Criterion. 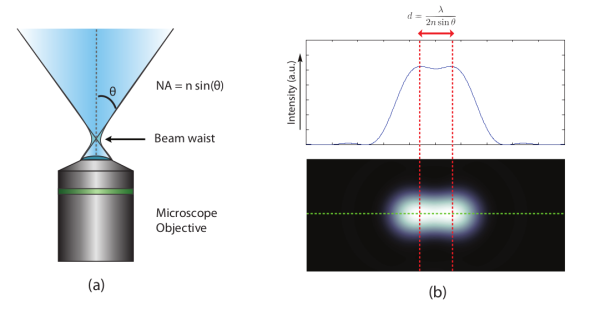 Figure 1. (a) Illustration of the numerical aperture (NA) of a microscope objective, (b) Two points are blurred by diffraction, which results in a limited resolution. The smallest resolvable distance between two points with an optical technique is limited by d=λ/(2nsinθ). [2]