There are many ways in which Tiff files or other file series are named. These files can have multiple counters (referring to slices, time frames, or channels), and these counters can have arbitrary prefixes and ordering. 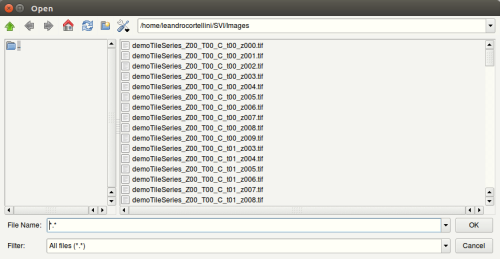 A file dialog (on Ubuntu Linux) showing a file series with a frame and channel counter.

Note that you only need to select the first of a properly numbered file series to load all in one go in Huygens. However, when a file is opened that appears to be part of a file series, the Huygens software shows the File Series Tool dialog. This tool automatically configures itself to load the entire series, and uses the proper dimensions. If that's what you want choose the 'load selection' and, if required, choose a smaller selection than all files. To load a single file, press the 'load single file' button in the bottom-right corner of the dialog. 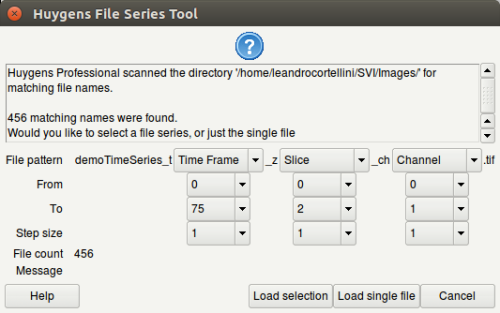 The Huygens File Series tool automatically scans a directory for a file series.

The file pattern is shown in the first row in the dialog. The counters in the file name are replaced by menu buttons for selecting the appropriate dimension for each counter. The options are: 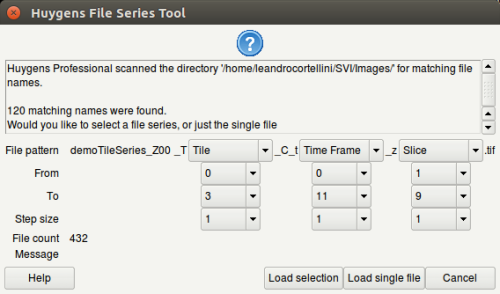 The File Series tool also allows to open file series of tiles and will open the Stitcher after loading the files.

Note that the selection has to be unique, i.e. it is impossible to have ignored variables without having a Slice, Time Frame, or Channel counter.

In the second, third, and fourth row, the range for each of the counters can be defined. A range from 0 to 9 with step size 2 will load the files 0, 2, 4, 6, and 8. Note that the time (in seconds) and z sampling intervals (in nanometers) are not adapted to the step sizes.