When a fluorescent sample is illuminated with light of the proper wavelength (in the absorption spectrum of the fluorescence molecules), the fluorophores in the sample will emit light of a longer wavelength. This emitted light can then be detected using, for example, a CCD camera. A camera will acquire a two dimensional image of the emitted light intensity. However, in regular widefield (epi-fluorescence) microscopy, the light emitted from out-of-focus regions cannot be distinguished from the light emitted from the in-focus light. Therefore, the image will be a combination of a sharp, focused image of the in-focus plane with a blurred, unsharp image of the out-of-focus light. It is for this reason that the primary application of a Wide Field Microscope is in the imaging of thin samples [1]. Deconvolution is typically applied to widefield images, in order to restore the actual objects in the blurred image.

An improvement to rejecting and reducing this out-of-focus light can be obtained by using a pinhole, as used in a Confocal Microscope. The acquisition of several 2D planes will build a volume representation of the object, a 3D Image. Confocal images will also benefit significantly from deconvolution, especially for the purpose of increasing contrast and reducing noise.
There are also other microscopy techniques that allow for 3D imaging, such as multi-photon microscopy, spinning-disk microscopy, 4-pi and STED microscopy.

The basic principle of fluorescence can be illustrated using a Jablonski diagram (Figure 1 (a)). A fluorescent molecule can be excited to a higher vibrational energy state (S1vib in Figure 1 (a)) with a light source. This excitation is most efficient at the optimal excitation wavelength of the fluorophore, which most often also corresponds to the absorption maximum. After this process of photon absorption, which happens almost instantly, the molecule quickly relaxes without radiation to the lowest vibrational energy level of S1. This state has a much longer lifetime (~ ns) as compared to a vibrational state (~ ps), which leads to the following transition to originate only from this state. During the next transition, the molecule falls back into the ground state (S0) either by non-radiative decay or by spontaneous emission. In the first case energy is released in the form of heat, in the second by releasing energy in the form of a photon. Since energy has been lost during the process due to the vibrational relaxation step, the emitted fluorescent photon has a lower energy than the excitation photon which leads to a red shift of the emission profile relative to the excitation profile. Quantum mechanically the exact transition leading to fluorescence are not clearly defined, but is described by a transition probability. Together with various inhomogeneous and homogeneous broadening effects, the emission profile will have a broad continuous appearance and typically resembles a shifted mirrored version of the absorption profile (Figure 1 (b)). 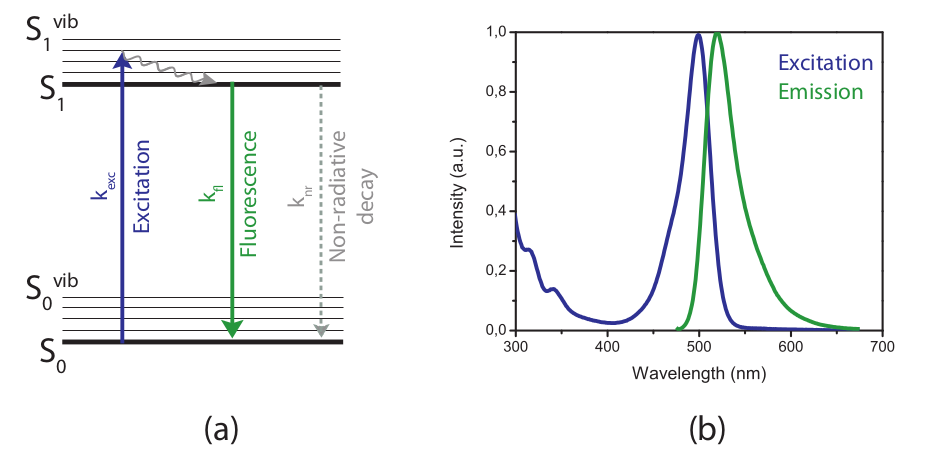 Figure 1(a) Jablonski diagram illustrating the energy state transitions leading to fluorescence and non-radiative decay to the ground state. (b) Excitation and the red shifted emission profile of Alexa 488. Here it is clearly visible that the emission profile is red shifted and is similar to a mirrored version of the excitation profile.