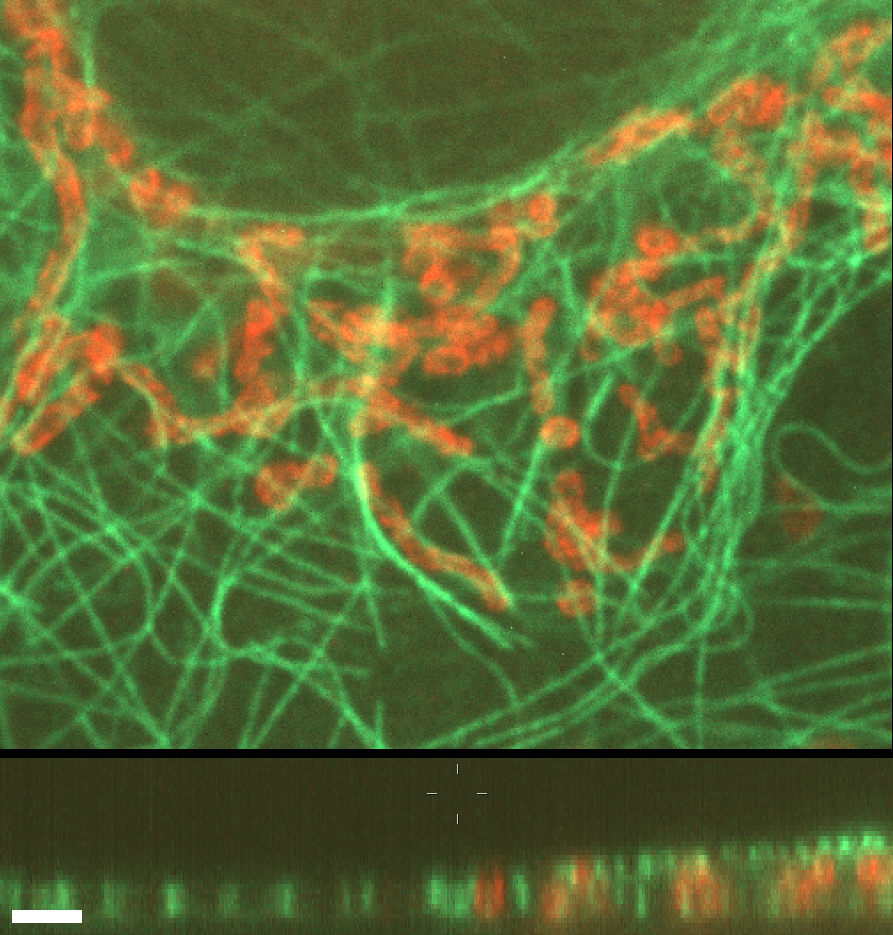 Raw Re-scan Confocal
Huygens Deconvolved
Huygens deconvolution for re-scan based confocal imaging can be added to Essential and Professional as a separate option, and improves the resolution, signal, and contrast within re-scan images significantly. The Re-scan Confocal Microscope (RCM) hardware is an add-on that can turn any fluorescent microscope into a 3D confocal system. The RCM is developed and sold by Confocal.nl.

Huygens is able to restore a wide variety of imaging artifacts. Besides the noise, blur and background - present in all fluorescent microscopy data, this specific raw Re-scan confocal example of TOMM20 mitochondrial staining also suffers from several hot pixels (see arrowheads in first image) and crosstalk (as indicated by the arrow in second image). The first image shows the raw Re-scan image with all the above-mentioned artifacts, which are one-by-one addressed in the images that follow. The first restoration step involves the successful removal of hot pixels using Huygens Hot & Cold Pixel Remover.

This second image shows the effective correction of all hot pixels (see arrowheads in previous image). There is however still crosstalk, which can be seen in this TOMM20 channel (red) as bleedthrough of signal originating from the microtubular staining (see green channel in figure at the top of this page). This crosstalk seriously poses a problem when performing multi-channel analyses like colocalization or object-based analysis. With Huygens CrossTalk Corrector you can easily and quickly estimate, and correct crosstalk between many channels simultaneously.

In this third image the crosstalk has been corrected. The image was further restored with Huygens specific Re-scan deconvolution option. Deconvolution is a mathematical operation used in image restoration to recover an image that is degraded by a physical process which can be described by the opposite operation, a convolution. Huygens renowned deconvolution with its advanced MLE algorithms involves the effective correction of background, blur and noise, typically leading to significant increase in resolution and signal (contrast).

Lastly, this fourth image shows the completely Huygens restored Re-scan confocal microscopy image of the TOMM20 channel from the image that is also shown at the top of this page.

Images show individual chromosomes of a nuclear spread from fixed mouse spermatocytes, immunostained for SYCP3 a component of the synaptonemal complex (Alexa 488-labelling). Raw images were acquired with RCM without re-scanning (left) and with re-scanning (middle). The raw RCM image was deconvolved with the Huygens Re-scan Deconvolution Option (right). Sample courtesy of A. Agostinho and C. Höög, Karolinska Institutet, Sweden; imaging and Huygens Deconvolution performed by Erik Manders, Confocal.nl, Netherlands.