The Back-projected pinhole Distance is a Microscopic Parameter describing the distance between pinholes in a Nipkow Disk Microscope.

Throughout the Huygens Software pinhole distances of Nipkow disks are specified as Back Projected distances in microns (µm), not real distances on the disk.


As is the case for the Back Projected Pinhole Radius, the distances between the pinholes in Nipkow spin­ning disks must be divided by the system magnification to calculate their Back Projected value. For the most used Yokogawa Disk, for ex­ample, the pinhole physical pinhole spacing of 253 microns and pinhole radius of 25 micros (50 µm in diameter). So with an ×100 lens the backprojected distance is 2.53 µm. If an extra zoom lens is placed between the disk and the sample, its magnification must be also considered.

You can find the values for two typical magnifications in the following table:

These values can be confirmed for any magnification just by stopping the disk and imaging the illumination pattern without any sample, as in the following image, and directly measuring distances between nearest neighbors there: 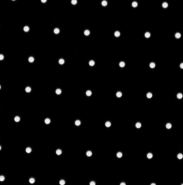