In July 2018, reports have reached us that the HyVolution 2 module in the LAS X software provides partly incorrect multi-channel meta-data for Huygens. This happens when multi-channel LIF files present in LASX are subsequently sent to Huygens via Hyvolution2. As you can imagine. this leads to sub-optimal deconvolution results. The issue is not only relevant when working with multi-channel images, but also if different channels are acquired using different microscope modes (e.g. confocal and STED). Therefore, we strongly encourage you to use one of the following alternatives:


With these suggested alternatives, Deconvolution Express or Batch Express/Feeder can be used in Huygens for a fully automated deconvolution workflow. If required, the deconvolved data can also be sent back to LAS X with conservation of the original meta-data. If you save images it is highly recommend to use a file format that is well-supported, preserves metadata and image dimensions, and can be used in most other software. Example formats are ICS2, HDF5 and OME-Tiff. See also File-Formats.
We' re waiting for a response by Leica, and will keep this information up-to-date.

Exchange data efficiently between LAS X and Huygens to optimize your image acquisition worflow, and deconvolve your images with ease.

HyVolution is powered by the reliable and high-quality deconvolution algorithms that Huygens is well known for.

HyVolution is a Huygens powered deconvolution solution developed by SVI and Leica-Microsystems. With HyVolution, Deconvolution is fully handled by Huygens and can be applied to TCS SP8 confocal images directly after or even during the acquisition stage. This creates an efficient workflow to optimize your confocal image acquisition settings in combination with the high-quality and GPU accelerated deconvolution provided by Huygens. The Huygens deconvolution provides a significant contrast and resolution increase in your acquired microscopy images, which significantly improves the visualization and analysis. In combination with a small confocal pinhole, the Huygens deconvolution can provide a significant resolution improvement well below the conventional confocal diffraction limit.
Deconvolution also allows users to image with lower excitation power and faster scanning speed, thereby reducing sample damaging, photobleaching and photo-toxicity. For both fixed and live-cell fluorescence imaging, the Huygens deconvolution is an essential step towards reliable image analysis.
There are two versions of HyVolution, and their functionality depends on the version number.
Both versions include also a stand-alone license for Huygens. 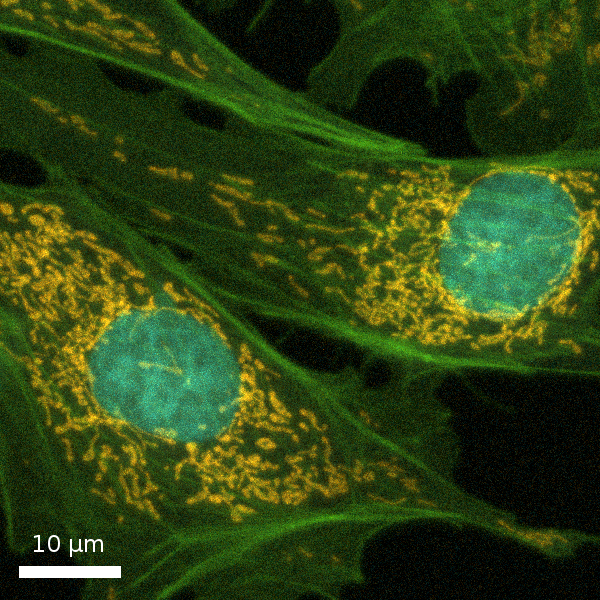 Introduced in 2015, this solution was offered as an efficient data-exchange option between Huygens and LAS X for the Leica TCS SP8 confocal systems. In addition, the LAS X software offers a HyVolution 1 user-interface mode that allows you to easily set optimal image acquisition settings for optimal deconvolution results. In combination with the data-exchange link to Huygens, you can open the image in Huygens immediately after the image is acquired, making the image acquisition workflow more efficient. The Huygens Deconvolution Wizard and other options in Huygens can then be used to optimally deconvolve, visualize and analyze your image. It is also possible to manually export the Huygens processed data back to LAS X.
A special license flag (L) is required in the Huygens license in order to make use of this functionality

Introduced in 2016, HyVolution 2 offers the additional option for automatic deconvolution with Huygens immediately after the image acquisition in LAS X. With this new version, you can select from four Huygens deconvolution strategies in LAS X at the acquisition stage. Using smart-templates, Huygens automatically estimates deconvolution parameters from the image pixel and meta-data, such as background and signal-to-noise ratio.
Thanks to this Huygens smart-template implementation, Huygens can deconvolve the acquired images automatically with very good results. This automated deconvolution functionality has parallels with the powerful Deconvolution Express option that is included in both Huygens Essential and Professional.
When the automatic Huygens deconvolution mode is selected in LAS X, each individual channel and/or time-frame will be automatically deconvolved by Huygens immediately after acquisition. During the deconvolution, the acquisition will start with the next channel or frame. When the deconvolution for a single channel or frame is finished, the deconvolved result is automatically send back to LAS X.
Next to the automated deconvolution option and the data-exchange, the HyVolution 2 package offered by Leica-Microsystems contains a fully functional stand-alone version of Huygens. With the stand-alone Huygens package the user can also use the Deconvolution Wizard and/or Batch Processor in Huygens for full and manual control on all the microscopic and deconvolution parameters.
A special license flag (H) is required in the Huygens license in order to make use of HyVolution 2 with Huygens.

Huygens in HyVolution: what do you get?

The Huygens product that powers your HyVolution product includes also a stand-alone Huygens license and includes many useful functionalities such as: Deconvolution Wizard, Deconvolution Express, Batch Processor and many easy-to-use 2D and 3D visualization tools. It is possible to extend your Huygens license with additional options. The Huygens license included in the HyVolution package can be installed on the acquisition system, but it is also possible to install/migrate the Huygens license to a separate workstation. It is also possible to purchase a second Huygens node-locked license for an offline workstation with a significant discount, or upgrade a node-locked license to a floating license for using Huygens on multiple systems.
Contact us for multi-user license possibilities, or request pricing information for a multi-user solution that best suits your needs.

Like the other deconvolution methods in Huygens, the deconvolution in HyVolution can be performed on the CPU and can be accelerated significantly using GPU cards. For an optimal experience with any Huygens Deconvolution method we do advise using the GPU acceleration to give you high-quality results up to 30 times faster compared to CPU processing. On the left-hand side you can click on 'Compare speed' to get an impression of the deconvolution speed with GPU acceleration vs CPU-only on a typical single channel confocal image using a high-end GPU. For more benchmark tests please visit the GPU benchmark page.

You are always welcome to try out Huygens deconvolution on your confocal images. When you install the Huygens Suite on your computer, also feel free to try out our other products. You can also request pricing information or contact us for more information about the options best suited for your hardware and image processing needs.