The Chromatic Aberration Corrector (CAC) can estimate and correct for shifts, and for scaling and rotational differences between different channel.
If you are also interested in correcting any possible bleed-through between channels, you may want to have a look at the Crosstalk Corrector as well.

In general, image analysis questions that involve multi-channel data like colocalization analysis and object -based analysis can hugely benefit from the above-mentioned restoration options. 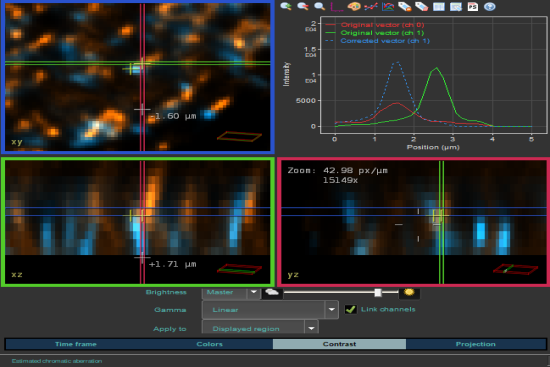 The Chromatic Aberration Corrector is equipped with orthogonal and time slicers that allow for a clear visualization of the estimated shifts. Additionally, the image intensity profiles along the shift directions are displayed after an estimation. Thus, the differences between channels and the presence of chromatic shifts can be visually assessed. An extra intensity profile free of chromatic shifts is also displayed, showing how a potential correction would improve the image.

Multi channel images that contain several frames (time-series) can also be corrected by this tool. When working with multi channel time-series images both the estimation and the correction for chromatic aberration are averaged over the time frames of each channel.

In the Chromatic Aberration Corrector, you can choose the method with which to perform the chromatic aberration estimations:


Among the above-mentioned methods, the cross-correlation is less affected by background or intensity fluctuations than the center of mass alignment. As a post-deconvolution tool, the Chromatic Aberration Corrector benefits from the noise reduction by deconvolution.

This tool reports the existing chromatic shifts as vectors. A shift vector edit tool allows a customized correction. Furthermore, the Chromatic Aberration Corrector is equipped with support for templates to save a set of vectors or load a set of predetermined vectors.

In a Fluorescence Microscope, different WaveLengths (colors) can be recorded simultaneously in a Multi Channel 3D image. Chromatic Aberration in the optical components causes the light paths for different wavelengths to be slightly different, causing a aberration in the recorded images.
In confocal microscopes detection pathways for different wavelength channels are often separated. Small misalignments between these pathways may result in an additional shift, and in rotation and magnification differences.

Recording Beads is a good method to calibrate the existing chromatic aberration (see Figure 1, Figure 2). The result of the analysis and correction delivered by the Chromatic Aberration Corrector on a beads image can easily be saved to a template and applied to any image taken under similar conditions.