To measure the Point Spread Function (PSF) of a microscope, one or more 3D images of Sub Resolution beads are needed. For a typical confocal system that means that the bead should have a diameter below 50 nm. So far we have not seen images from such small beads which had a sufficient Signal To Noise Ratio to extract a PSF directly, nor a sufficient signal to accurately determine their position so as to average them.

Quantum dots have been considered for this purpose, but good preparations of these are hard to obtain as they easily form aggregates, thus not being "single points" anymore.

If your beads are not point-like they can not be used directly as PSFs. In current Fluorescence Microscopes this happens with almost any bead, unless you are using quantum dots. They are too large, and if you use them as PSFs in DeConvolution you will wash out from your data any feature that is of a size comparable to the bead image, or smaller. Moreover, the remaining data will suffer from Over Restoration.

A single bead image will also have a lot of Photon Noise, thus an averaging procedure using many beads is in any case very much recommended.


One solution is to use large beads with a diameter from 100 nm to 200 nm, and to correct for the bead size. The correction is done with a inverse deconvolution run. Given a model of the bead shape, the PSF is computed 'distilled' which its convolution with the bead model matches the measured bead image. (See Huygens Deconvolution for more details).
In case single bead images have insufficient signal for the PSF extraction, the individual bead images can be accurately aligned and averaged to enhance the signal and increase the Signal To Noise Ratio. All this is automatically done with the Huygens Essential Psf Distiller.


Admittedly, these points are difficult to achieve. How much leeway is there with respect to the microscopic parameters? See Parameter Variation).

Briefly, the procedure has the following sequence:

This post describes steps 1 and 2 of the procedure. To see steps 3-5 using the Huygens Software, go to Psf From Beads.

The beads are appropriately diluted, absorbed to a coverslip, embedded in your usual embedding medium and placed on an object slide.

When prepared properly, you should hardly see any Bleaching Effects during the recording of an image. This allows you to use a high averaging count during image acquisition.


(From an Invitrogen Product Information Sheet)

Experimental protocols depend somewhat on the instrument and software used; please refer to the materials applicable to your particular instrument. The following serves as a guideline for mounting Tetraspeck microspheres on microscopic coverslips.


N.B.: as the beads should be measured under the same conditions as you will use later for your samples, the same mounting medium should be used as well!!!


If the number of planes recorded along Z is too low, you will get an error when distilling the PSF: "the axial image size is too small". It can also happen that this error is not displayed but no usable bead is found in your image.

What matters for a correct PSF distillation is not (only) the number of slices, but the total physical volume that is actually imaged. A good bead image includes information of the cone of blur around it, that specially in Wide Field Microscopes and in low Numerical Aperture (NA) cases can be very large. For example, when using a 0.95 NA objective in a widefield microscope the PSF is very large along Z, and a larger volume must be imaged in this direction than in the NA = 1.3 example above to register all the relevant information. You could indeed acquire more planes, but you can also combine that with a reduction of the Sampling Density along Z. The ideal sampling rate (that depends on the NA) for normal imaging can be found using the Nyquist Calculator, but when recording beads some OverSampling is recommended.

If you ask the calculator to show also a PSF, you can find out how large it is expected to be, both in real volume and in number of samples when imaged at the Nyquist Rate. (Experimentally you can record some less planes along Z than that is shown there, because it is not recommended to acquire very low intensity regions much affected by noise. But that theoretical PSF is a good guide to see how much volume is necessary to distill a PSF).

For a 0.95 NA typical widefield microscope the beads should be recorded in a 3D image that covers at least ~ 21 µm along the optical axis. The Nyquist Rate along Z for these conditions is one plane every ~ 700 nm. If we record the beads with some OverSampling (recommended), at one plane every 500 nm, we need at least 42 planes to cover that volume. At that rate, despite we recorded less planes than in the NA = 1.3 example above, we have covered much more 3D volume!!!


If the number of beads in the image is of an order much larger than 10, chances are that they are too close to each other. (Therefore their blurred images overlap, and it is no longer possible to disentangle their PSF's). The Psf Distiller will reject beads that are too close to each other. You can make its criterion less strict by using the "reduce PSF size" parameter, but there is a limit for this to work properly.


This could be an example of a bead image, is a top view Fast Mip. The concentration of beads is quite good (the beads are well and evenly spread), but an even lower concentration would be even better: a low concentration will minimize the chance of bead clusters and/or overlapping PSF's. 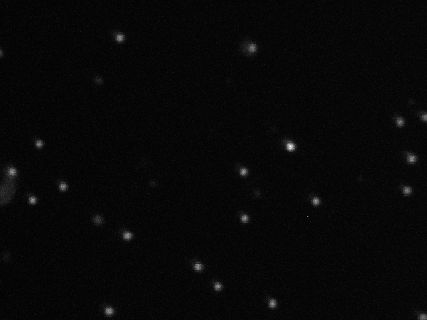 On the other hand, the following image has such a high bead density that is useless for a PSF distillation: 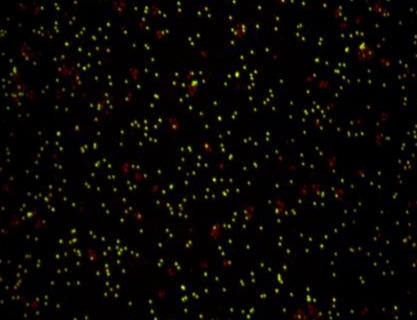 The procedure to obtain a PSF from the recorded beads using the Huygens Software continues in Psf From Beads.

Search the FAQ for "bead".