Intensity and linearity preservation during deconvolution


The information below is a summary of this downloadable white paper.

Huygens deconvolution uses the most advanced implementations of the best MLE-based algorithms currently available1, 2. This ensures that the integrated intensity and linearity of signal is preserved, which is of course crucial for reliable image analysis, as is shown by several independent studies 3,4,5. The Huygens deconvolution process can basically be interpreted as the algorithms re-localizing the light distributed in the 3D volume, gathering the blur and bringing it back to its original source. Like that, the total intensity (integrated all over the volume) in the restored image has an expected value equal to the original image. This is due to the Huygens Point Spread Function which has a total integrated intensity of 1. 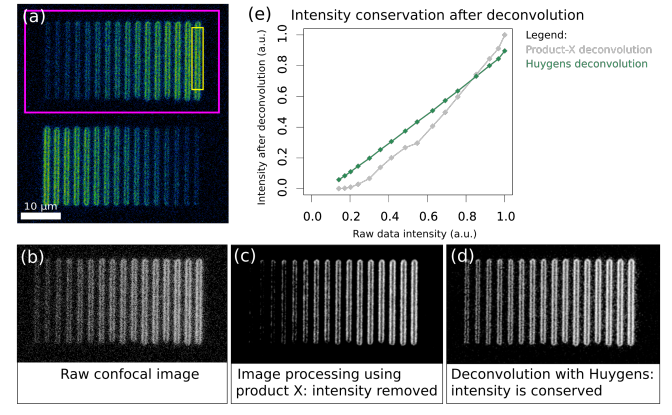 Intensity conservation measurements after deconvolution. All images are SUM projections across the z-axis to reflect the total intensity across the full volume. Argolight HM 2x16 linear intensity pattern, (a) confocal raw data shown in false colors. (b) greyscale view confocal raw data, (c) deconvolved result with product-X, (d) Huygens deconvolved result, (e) pattern intensity (sum) for both deconvolution results. Horizontal: normalized sums of raw data intensities. Vertical: sums of deconvolved intensities. Huygens results (green) untreated, the result for product-X (gray) was renormalized to unity (see text). Huygens (green) shows a direct linear relation with the raw data pattern intensity, while product-X (gray) does not.
​
However, it is still possible that you measure a change in the integrated intensity after deconvolution.
Why is this very likely and shouldn't you immediately worry ?
​
1) Removal of BackGround. Background signal, as defined by the parameters. is corrected after deconvolution and can't contribute to the total intensity anymore. Therefore, the correct sentence would be "integrated intensity of the interesting signal is preserved". If you aim at preserving the total intensity, set the background to zero in the Restoration Parameters.
​
2) A constant multiplicative factor (reported by the software) may have been applied, if the memory of the computer is limited and the data must be kept at 16 bit. This factor is usually smaller than 1 if the intensity of the restored maxima increases so much during the deconvolution that the actual values exceed the 16 bit range. To keep it within that range, a normalization factor may be applied that reduces the integrated intensity. See Ratiometric Images. If your computer system is 64 bit (most likely) and there is sufficient memory available, the final result is in 32 bit floating point format which requires no further scaling.
​
3) Blur that is too close to the image borders, both in the lateral (XY) as in the axial (Z) direction, may be restored as originating from sources outside the image. These sources are not present anymore in the restored result, and will not contribute to the integrated intensity. Thus, light can "leak out" at the image limits, if the imaged objects are "beyond" them!!! This effect is usually very small if the imaged volume is large in all dimensions and your objects are away from the borders, but may become appreciable in for example flat wide field images and shallow confocal images.
​
4) As a consequence of the previous point, images that for some reason must be deconvolved in independent blocks by a process known as (Brick Splitting) will suffer that effect multiple times, once per block: the total amount of light that leaks out is higher, for the benefit of a higher blur removal.
​
5) Storing the result in some file formats with Dynamic Range limitations were data may for example be clipped. See Tiff Scaling.
​
6) 'Defective' clipped raw data that does not represent physically realistic intensities, are not a good staring point. If clipping/saturation in raw data is an issue, it is advised to re-image the obejct. See also this page on imaging recommendations.
​
Further readings