With the Huygens Object Stabilizer option you can measure and correct for cell motion, thermal drift, shaking, and other types of movement (i.e. translation in x, y and z, and axial rotation). Both the measurement and subsequent stabilization are done in 3D and at sub-pixel level. The Stabilizer not only stabilizes 2D or 3D time series, but it also allows the alignment of slices within a 3D stack. The Object Stabilizer can be found in the Deconvolution menu in both Huygens Professional and Huygens Essential.

Since object stabilization is a crucial step for deconvolving STED data, this option is integrated in the STED and STED 3D optical options. 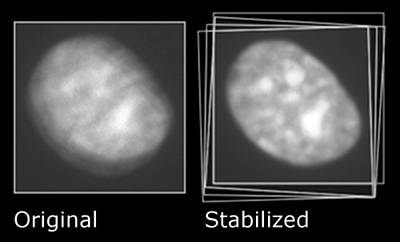 Stabilization over time works best if the 3D time series has been deconvolved first. Deconvolution enhances resolution and reduces noise, which helps to analyze motion. The stabilization in time series refers to the image as a whole and not to the individual objects that move over time. These natural individual movements over time are tracked with the Object Tracker Option.

For time series there are four stabilization methods available:


Alignment of slices in 3D stacks (no time series)

3D alignment can be applied prior to deconvolution if the stack suffers from "severe" misalignment between adjacent slices (e.g. due to temperature changes altering the Z-stepper position). In those cases the Object Stabilizer may improve the deconvolution of 3D stacks and can be applied beforehand. In all other cases applying deconvolution first is preferable.

An x-z slice of misaligned z stack (left), and the alignment result (right), The chromatic shift in a stack like this one can be corrected using the Huygens Chromatic Aberration Corrector option.

This method is optimized for correcting thermal drift in STED imaging systems. No rotation is taken into account and no further input is require. After going through the preprocessing stage you will be taken directly to the Stabilization stage.

In some Light Sheet Fluorescence Microscopy (LSFM) setups, the excitation and emission axis are oriented at an oblique angle relative to the sample stage. In such systems, the specimen mounted on the stage is scanned horizontally to move the focus through the sample. However, since the scanning does not occur parallel to the optical axis, this leads to a movement in multiple spatial directions. The effect is a shear (skew) in the recorded 3D image stack, thereby complicating deconvolution since the PSF is sheared accordingly. Therefore, the image must first be corrected by shifting all the z-slices back into their correct position. The shifts between consecutive z-slices is constant and depends on the step distance of the stage and the objective angle. The Object Stabilizer in Huygens version 18.04 (and later) has been extended with an option to correct for the skewing within a light sheet image. By entering the step distance and objective angle, the appropriate back-shifts are calculated and applied to each z-slice. After stabilization, images can be further processed, and deconvolved as usual. For more information please see the CMBF, Harvard Medical School FAQ: here


Image description:
Skewing and de-skewing of LSFM images. Some LSFM setups have their excitation and emission objectives positioned at an oblique angle relative to the sample stage. The sample mounted on the stage is scanned horizontally to move the focus through the sample (see arrow), which leads to a skew in the recorded 3D image stack an also in the PSF. The Huygens Object Stabilizer option can de-skew all z-slices to their correct position. 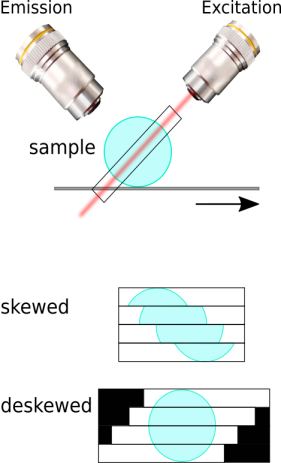