Stimulated Emission Depletion (STED) microscopy is a fluorescence microscopy super-resolution technique that is able to circumvent the optical diffraction limit. STED microscopy was first described in theory by Stefan Hell [1]. Stefan Hell was one of the three persons to win the Nobel Prize in Chemistry, 2014 for their separate important achievements in optical super-resolution microscopy.

STED Deconvolution
STED microscopy has proven to be a valuable super-resolution technique for resolving objects smaller than the diffraction-limit, and Huygens leading STED deconvolution pushes this even further. All types of STED (STimulated Emission Depletion microscopy) images can be deconvolved with Huygens succesfully. Huygens unsurpassed STED deconvolution offers two-fold improvements in X, Y, and Z resolution and boosts contrast with SNRs increasing by a factor of eight. A FWHM resolution of 22nm has been achieved. More in this publication.

Figure 1. (a) Jablonski diagram illustrating the process of excitation, stimulated emission and fluorescence. (b) When two diffraction limited STED spots are overlapped with a diffraction limited excitation spot with offset Δx and when the STED intensity is high enough, the fluorophores in the outer region of the excitation spot are effectively depleted to the ground state by stimulated emission. In the region where there is no STED field present, the fluorophores are still able to fluoresce. As a result, the effective fluorescence spot is reduced to below the diffraction limit, but only in the direction of the offset. [2]

The offset method as described in the previous section allows resolution increase only in the lateral direction of the offset. This limitation could be partially solved by using four offset beams. However, this requires either multiple STED lasers or splitting a single high intensity STED beam into four separate beams. Both options are experimentally challenging, since it requires very precise alignment of multiple beams. A more delicate solution would be to shape a single STED beam in such a way that it creates a symmetrical high intensity profile around a zero intensity center in the focus. This doughnut-like shape (figure 2 (c)) allows efficient and symmetrical confinement of the depleted region. To create a perfect null intensity in the focus of a high NA lens, it is quite intuitive that the phase front of the incoming beam must be shaped such that the focused light interferes destructively in the focus center. Over the last decade, different options have been implemented to create such a focal spot, and the development is still ongoing.
One way to create a perfect null intensity in the focus is by using an annular phase plate [3]. This shape modification can also be realized with a vortex phase plate (figure 2 (c) top figure). The vortex phase plate is most widely used for super-resolution in the lateral direction, while the annular phase plate is used for depletion in the axial direction, leading to super-resolution in the Z dimension. Also a combination of the two phase-plates can be used, as is implemented in for example the Leica SP8 STED 3X system.
There are also alternative methods to obtain a suitable STED focus, such as using a spatial light modulator (SLM) or by using other types of phase-plates or phase modulators [4, 5]. However, the annular and vortex phase plates are still most widely used in STED microscopy. 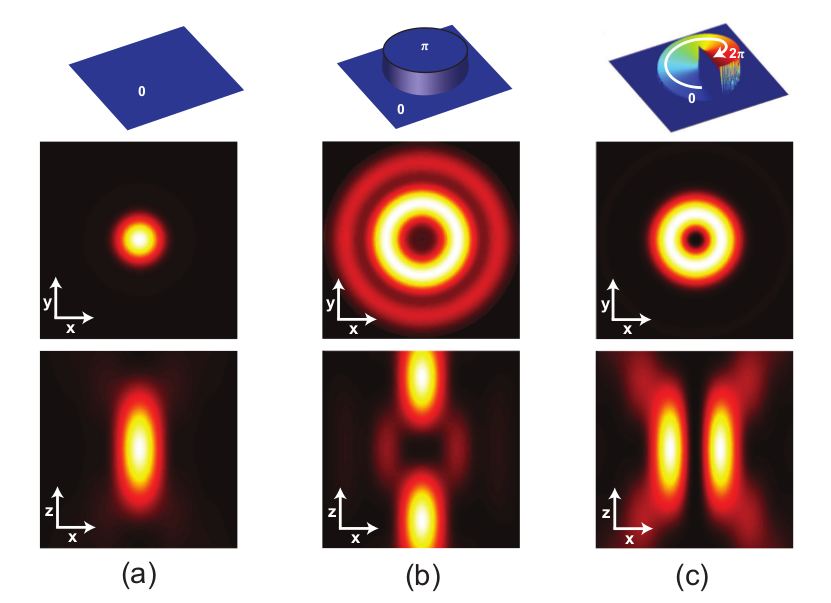 Figure 2. Simulation results of the normalized intensity in XY and XZ planes in the focus of the objective with perfect circularly polarized light. As a result of the symmetry, the ZY plane is similar to the ZX plane and is therefore not shown here. Black represents a normalized intensity of zero, while white represents a normalized intensity of one. The simulations are performed in a 800 nm × 800 nm area for each plane with 10 nm step size. The top illustrations show the type of phase adjustment that was used. (a) When the incoming beam is not spatially phase-adjusted (like a confocal excitation spot), the focus is a diffraction limited spot in XY plane and has a cigar shape in ZX and ZY planes. (b) When an annular phase plate is used to spatially adjust the phase of the beam, the focus in XY plane will have a doughnut shape. ZX and ZY plane will contain two cigars aligned in Z with a null intensity in the center. (c) A vortex phase plate will also lead to a doughnut in XY plane, but with much higher absolute intensity compared to the doughnut formed by the annular phase plate. In ZX and ZY plane the focus shows two cigar shapes aligned in respectively X and Y direction. [2] 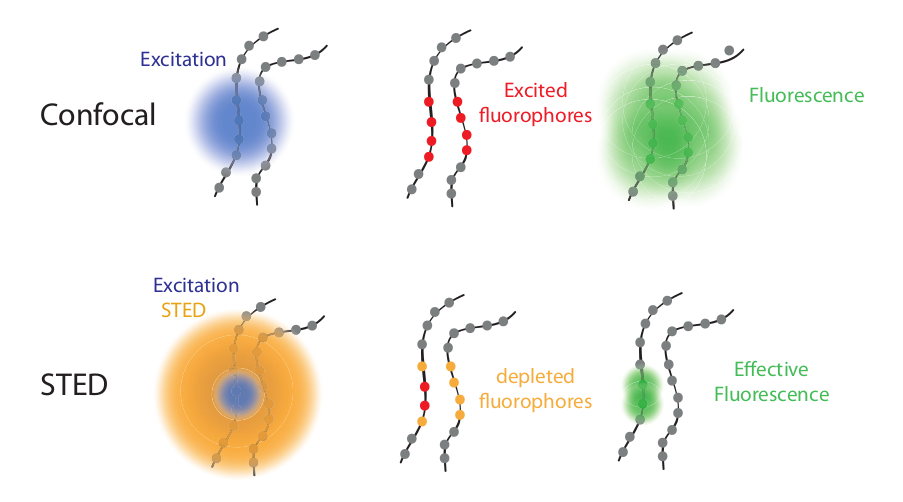 Figure 3 illustrates how the overlap of a doughnut shaped STED beam leads to an increase in resolution. In this figure, two thin wire like structures are labeled with fluorophores and are in close vicinity of each other (< diffraction limit). In conventional fluorescent microscopy the two wires cannot be spatially separated due to the diffraction limit as a large area of fluorophores is excited and therefore able to fluoresce. When STED is applied, the overlapping STED doughnut results in depletion of the fluorophores in the outer region of the excitation spot. This depletion results in a confinement of the area in which the fluorophores are still allowed to fluoresce.
When the sample is raster scanned, the reduced size of the effective fluorescent spot enables the spatial separation of the two closely spaced wires in the resulting image. The increase in spatial resolution is dependent on the STED excitation intensity and can be described mathematically. With a doughnut-shaped STED focus, the FWHM Δr of the effective fluorescent spot can be described by:

Equation (1) is the familiar inverse square root intensity law for STED: the FWHM resolution approximately scales with the inverse square root of the STED intensity. The definition of Δr is also illustrated in figure 4. Also note that the first part of the right hand of equation (1) is the conventional diffraction limit, i.e., when the STED intensity ISTEDmax = 0 equation (1) reduces to Abbe’s diffraction limit. The full derivation of this equation can be found here. In theory, the maximum obtainable resolution as stated by equation (1) would be infinitely small. In practice however, the extreme intensities required to reach extreme high resolutions would lead to unwanted effects such as photo-bleaching, optical trapping, multi-photon absorption, sample heating or even sample destruction. However the setup would most likely be practically limited due to stage drift or become dark noise limited due to the decreasing intensity that inevitably comes with increasing resolution. Moreover in the ultimate environment where STED is to be used, i.e. in biological samples, other processes such as diffusion play an important role.
The chosen fluorophore will also largely determine the maximal obtainable resolution. Some fluorophores are more sensitive to the STED depletion lasers than others. Regardless of the STED intensity: there will always be a fraction of fluorophores in the depletion area that are not efficiently being depleted. Additionally, some fluorophores in the depletion area may be re-excited (anti-Stokes) by the depletion light. If the emission filters are non-perfect, then also some stimulated light will still reach the detectors. These three factors will lead to an immunity fraction, which is the percentage of fluorophores that is not being depleted, and thus still able to fluoresce. This property is fluorophore dependent, and can be determined experimentally. Gated-STED (g-STED) is a technique that makes use of the lifetime information of the emitted light, and can thereby help to minimize the immunity fraction and increase the resolution. 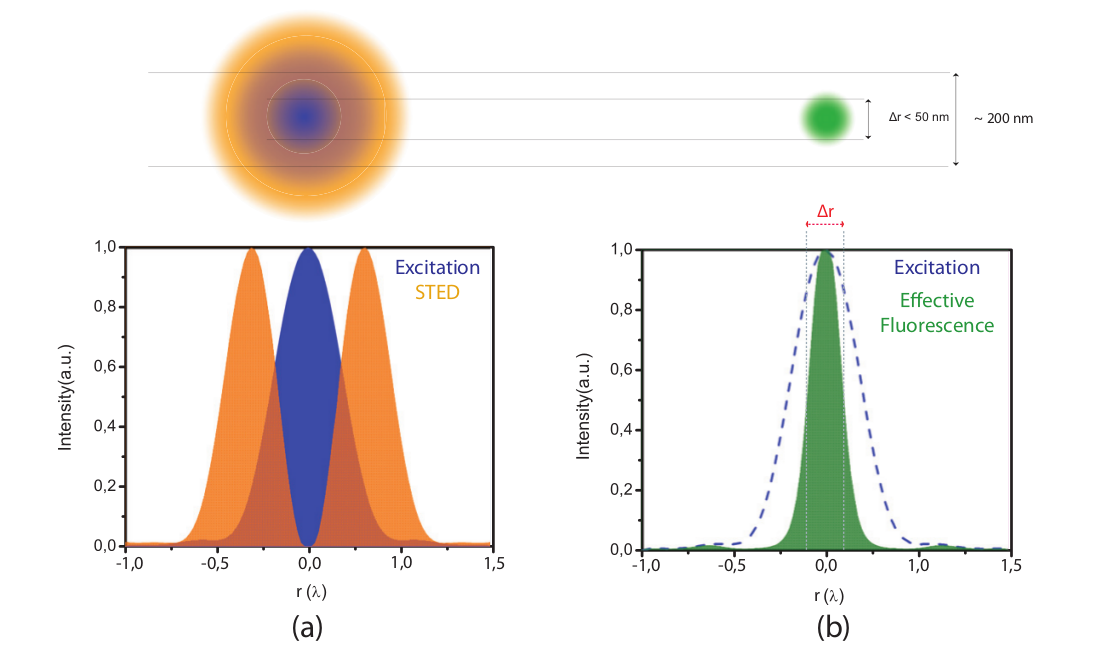 Figure 4. Top: overlapping a doughnut-shaped STED spot with a diffraction limited excitation spot will result in a confinement of the area in which fluorophores are able to fluoresce. Bottom: (a) Graph illustrating the overlap of the intensity of the STED donut shaped spot ISTED (r) (orange) and excitation spot (blue) in one dimension. (b) Graph illustrating the decrease in the width of the effective fluorescence probability h(r) (green) as a result of STED. Δr is the FWHM of the effective fluorescence probability (equation 8.3.) [2]

STED microscopy allows super-resolution imaging in the 50nm range. Unfortunately, this increased optical resolution also leads to a drawback: because many fluorophores are depleted by the depletion laser, this also results in a lower signal (fewer photons) being captured by the detector. Because of the Poisson nature of photon statistics, the signal-to-noise ratio of the resulting image will decrease compared to normal confocal imaging. Therefore the SNR value in STED images will be much lower compared to their confocal counterpart.
Luckily, deconvolution offers a great solution. Since 2012, the Huygens software is able to generate a theoretical PSF based on STED microscope parameters. This theoretical PSF can be used in the deconvolution process, which will significantly reduce the noise in the image, and will increase the contrast of up to 10 times. Additionally, the Huygens deconvolution algorithms are able to increase the resolution in the image with a factor of 2 in both lateral and axial direction.
Since 2014, Huygens is also equipped with a PSF generator for STED 3D systems. Huygens is able to generate a theoretical PSF based on a mixture of depletion in lateral and also depletion in axial direction.
STED images often suffer from small drifts, which are specifically visible when viewing the image in the XZ or YZ direction. Huygens has a specific STED stabilization option, which is build into the Object Stabilizer, deconvolution wizard and the Huygens Batch Processor. The STED stabilization allows to correct for sub-pixel resolution shifts, and can help to make the image restoration process more optimal, and often leads to in improved resolution in the restored image.
Although a STED system in theory does not have bandwidth limit, one can define an optimal practical sampling rate. This ideal sampling rate for STED can be calculated with the online NyquistCalculator.