The increase in spatial resolution in STED microscopy is dependent on the STED depletion intensity and can be described mathematically. This page gives the mathematical derivation of the inverse-square-root STED formula:

be the normalized excitation probability in the focal plane resulting from the excitation pulse. After the passage of a STED pulse, the fluorescence probability

of a molecule has decayed to

denoting the cross section for stimulated emission, STED pulse duration and the focal intensity of the STED pulse, respectively. Note that

her is given by number of photons per unit area per unit time.
As a result of the overlapping STED beam, the probability to detect a photon from location

Given a lens with semi aperture

, we can describe the spatial excitation probability

and the STED intensity

are also illustrated in figure 1 (a) as the blue curve and yellow curve respectively.

is simply the maximum STED intensity in the doughnut shape. For further simplification we can define the constant

is the FWHM of the effective fluorescent spot, which cross section is also represented as the green curve in Figure 1 (b). We can further approximate equation (6) with a Taylor series

to the second order:

At the FWHM we have

, so we can solve for

can then be described with:

From equation (1) we can see that for

the fluorescence has dropped to

of the initial value. By introducing 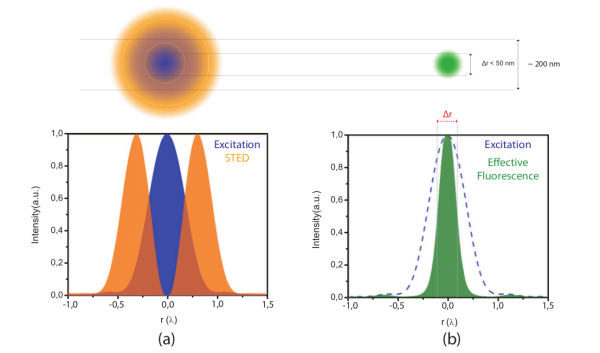 Figure 1. Top: overlapping a doughnut-shaped STED spot with a diffraction limited excitation spot will result in a confinement of the area in which fluorophores are able to fluoresce. Bottom: (a) Graph illustrating the overlap of the intensity of the STED donut shaped spot I_STED (r) (orange) and excitation spot (blue) in one dimension. (b) Graph illustrating the decrease in the width of the effective fluorescence probability h(r) (green) as a result of STED. Δr is the FWHM of the effective fluorescence probability (equation 8.3.)