In fluorescence microscopy, the acquired image is always a blurred representation of the actual object under the microscope. This blurring is described by the so-called Point Spread Function (PSF). The PSF describes what a single point in the object looks like in the image.

The image formation process in a light microscope is linear: when two objects A and B are imaged simultaneously, the result is equal to the sum of the independently imaged objects. As a result of this linearity property, the image of any object can be computed by dividing the object into smaller parts, imaging each of these, and subsequently summing the results. If one divides the object into increasingly small parts, it is eventually a collection of infinitely small point objects. Each of these point objects produces a PSF in the image, shifted and scaled to the location and intensity of the corresponding point, respectively. The resulting image is therefore a collection of (often overlapping) PSFs. This image formation process is mathematically represented by a convolution equation: the object convolved with the imaging setup's PSF gives the acquired image.

The PSF is a valid measure for the quality of an optical system as it reveals how points are blurred in the image. Because the PSF is always normalized (i.e., the integral over its entire span is equal to 1), it is easy to compare PSFs of different systems and thereby compare their imaging qualities.

If the PSF is known, it can be used to bring the acquired microscopy image closer to the true object through a deconvolution. Deconvolution reverses the imaging convolution in an iterative fashion: a model of the object is made and iteratively improved upon by convolving it with the PSF and comparing the result to the actual image. At the end of the process, the model of the object is an accurate representation of the true object, with improved resolution and signal-to-noise ratio relative to the acquired image. Notably, deconvolution can re-separate neighboring particles with overlapping PSFs, which is not possible with simple deblurring operations.

Because the PSF is the basic "brick" of which microscopy images are "built", one should record details at least on the scale of the PSF to gather all available information. Failing to do so spoils any attempt of doing deconvolution, because deconvolution works on the PSF scale. From this notion follows the sampling criterium known as the Nyquist rate. 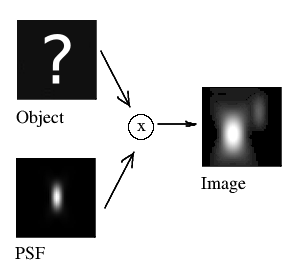 The aim of deconvolution is to find the true object using knowledge of the PSF and the acquired image.

The shape of the PSF depends on the type of microscope and the used microscopy parameters. If these are known, a theoretical PSF can be computed based on model imaging conditions. This PSF can then be used for deconvolution.

Two crucial parameters are the refractive indices (RIs) of the used lens medium and the embedding medium, since a mismatch between the two will cause the PSF to become distorted. This distortion then depends on the imaging depth (with respect to the coverslip): the image quality gets progressively worse (the PSF becomes larger) as you move deeper within the sample. If the theoretical PSF is used for deconvolution, it is therefore important to calculate it in a depth-dependent manner, by calculating a different PSF for different acquisition depths.

Huygens-generated confocal PSF when using oil (RI=1.51) as lens medium. Click the buttons to change the RI of the embedding medium from 1.51 (no RI mismatch) to 1.00 (strong mismatch). 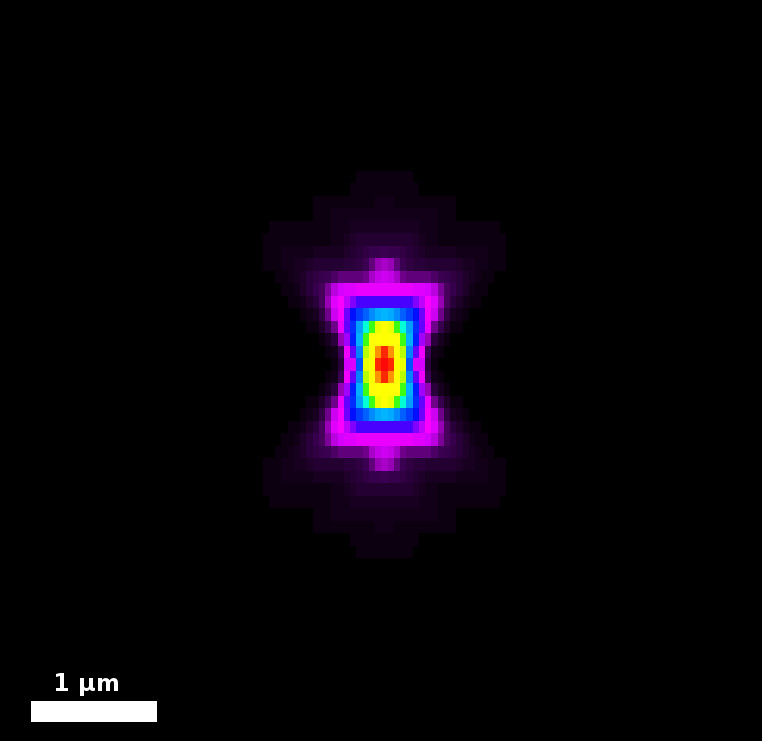 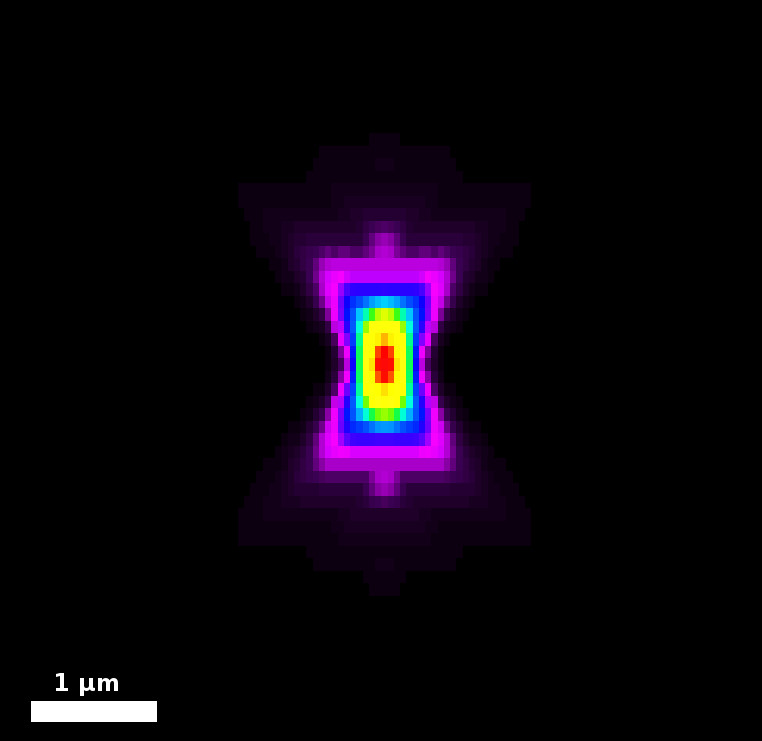 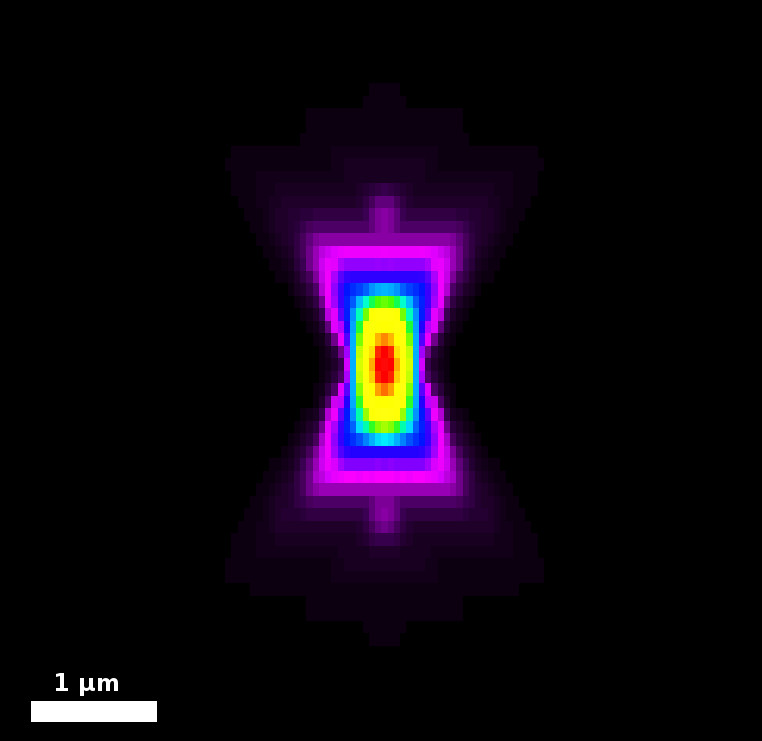 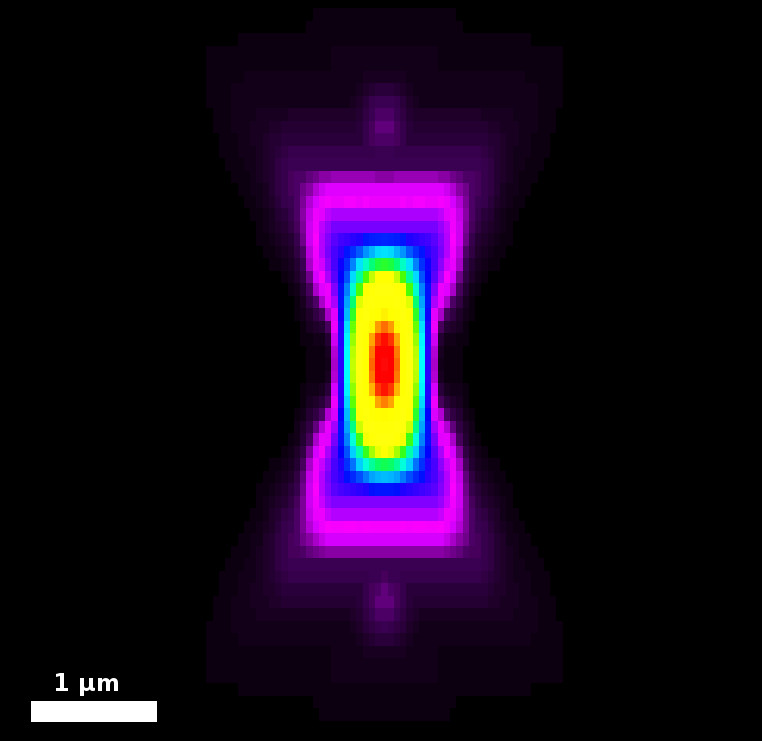 Notice that between 1.51 (no RI mismatch) and 1.40, not much is happening. However, once your embedding medium RI goes below 1.4 (the NA of the objective), the PSF starts to change more significantly. This is because the NA of the objective will be effectively limited by the RI of the embedding medium in that case due to total internal reflection, which effectively will stretch the PSF along its axial axis.

Effect of RI mismatch and imaging depth on PSF shape

Huygens-generated PSF when using oil (RI=1.51) as lens medium and water (RI=1.33) as embedding medium. Click the buttons to see the effect of the imaging depth (with respect to the coverslip position) on the PSF. 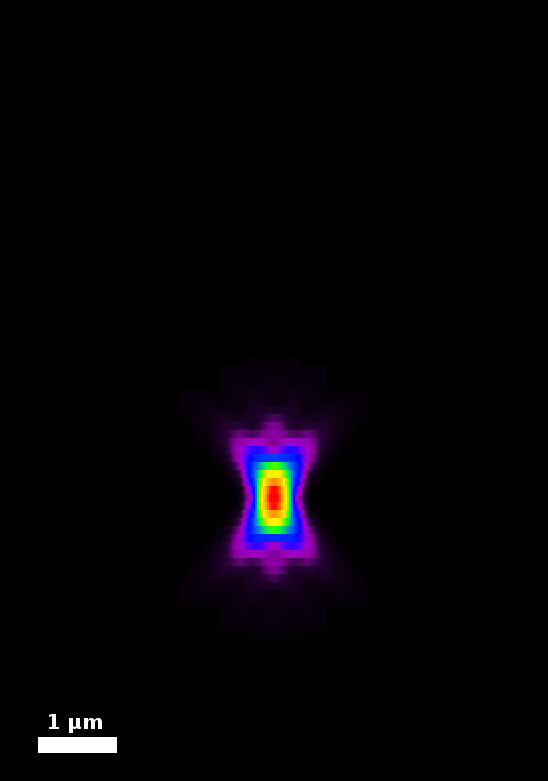 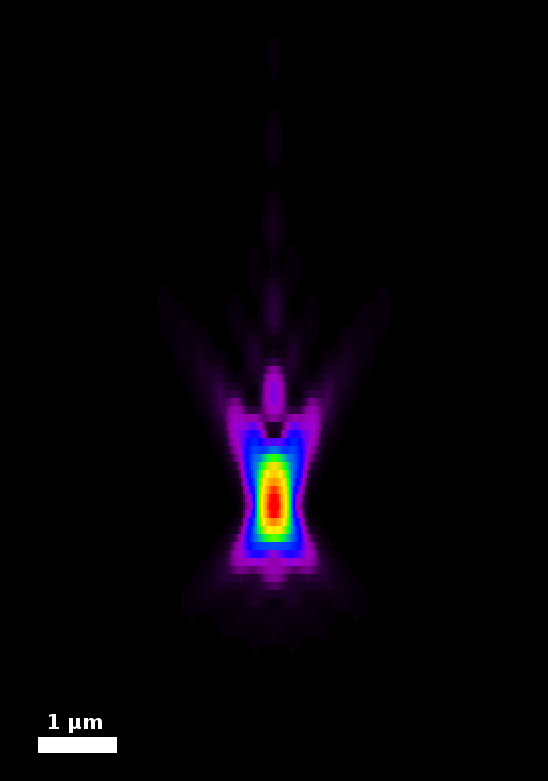 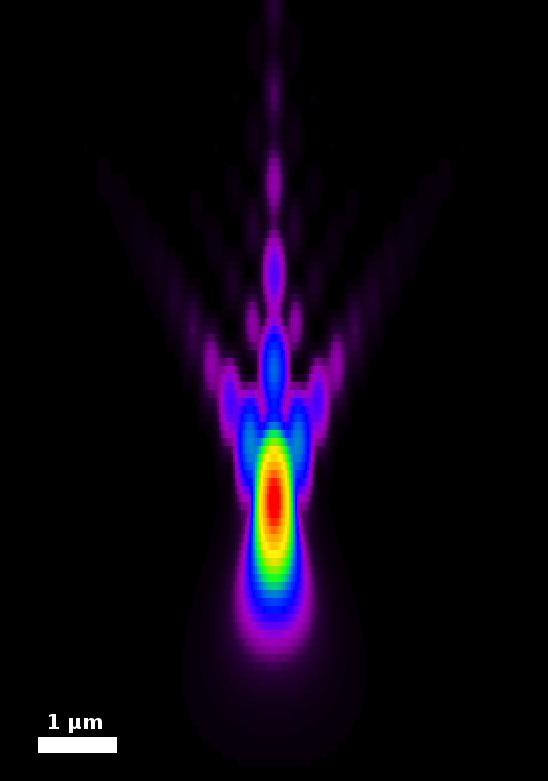 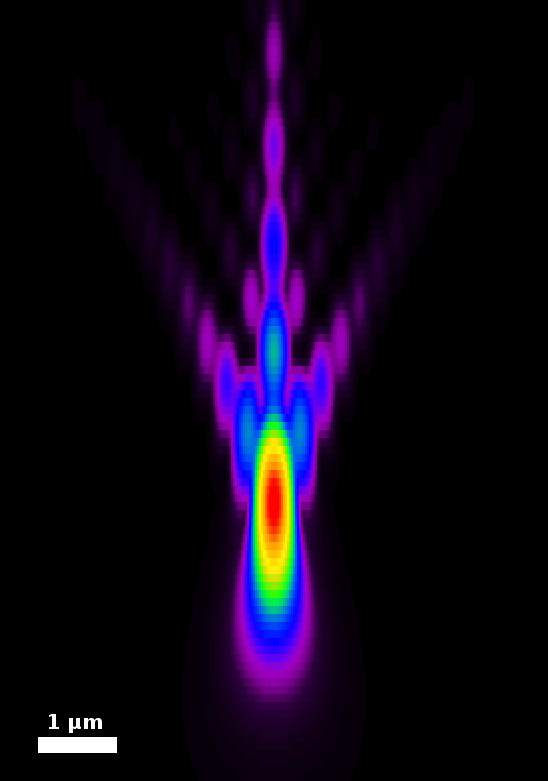 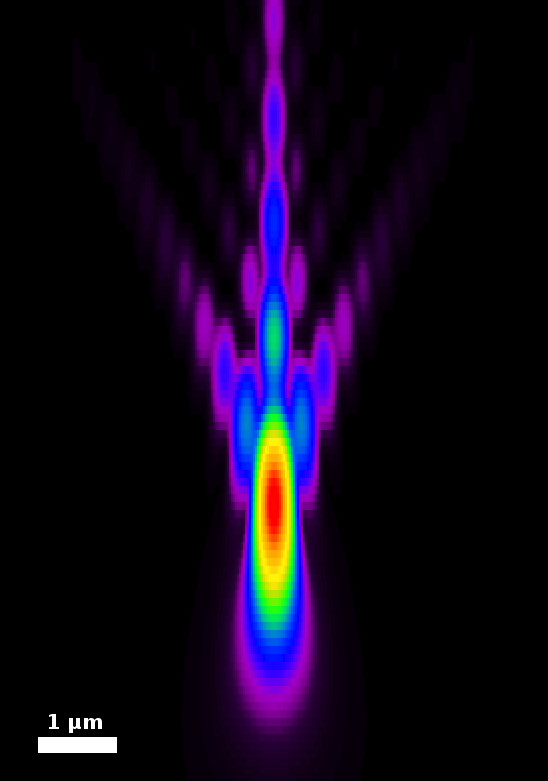 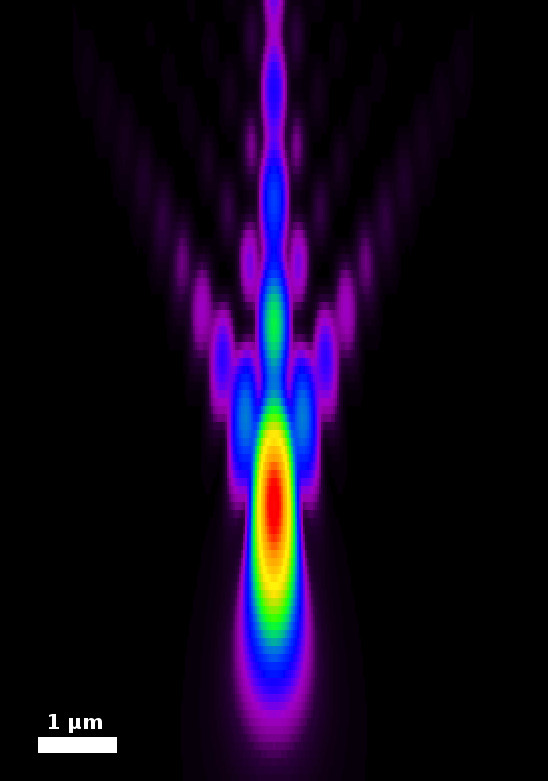 The refractive index mismatch makes the PSF more elongated and more assymetrical in the axial direction. The distortion increases with depth. The shown PSF asymmetry is typical for a microscope setup in which the Lens Refractive Index is larger than the Medium Refractive Index: the smoother parts are at side of the coverslip and the peaks and even secondary maxima are at the deeper end. This pattern is mirrored if the lens medium RI is smaller than the embedding medium RI.

The shape of the PSF depends on the microscope type used for image acquisition. Click the names below to see what the corresponding theoretical PSF looks like. Please note that the scale bars in the figures indicate different sizes.

The properties of a confocal PSF largely depend on the used pinhole: a small pinhole diameter will give a high image resolution, but at a cost of signal. Confocal images typically have a low SNR as the pinhole blocks most of the sample light.

The PSF of a widefield microscope is larger than that of high-resolution microscopes but the images do have a high SNR.

The multi-photon PSF mainly differs from the traditional confocal PSF in the axial direction. The use of multiple low-energy photons for excitation makes for smoother PSF with less deviation in the axial direction. The impact of a refractive index mismatch is therefore smaller on a multi-photon system than on other microscopes and the method is better fit for deep-tissue imaging.

The PSF of a Re-scan microscopy (RCM) system has a FWHM of a factor √2 smaller than that of a conventional confocal microscope. This resolution increase holds for medium to large pinhole diameters, giving the RCM images a higher SNR.

Due to depletion by the donut-shaped STED beam, the STED PSF is more narrow than that of a traditional confocal microscope, giving a higher lateral (x and y) resolution. STED images are, however, typically noisier than traditional confocal images. To improve the resolution in the z-direction as well, 3D STED was developed. Here, an additional depletion beam depletes the PSF in the axial direction, leaving only a small spot in the middle.

The thickness of the excitation light sheet at a point in the sample determines how strongly this point is blurred in the axial direction in the image. The size of the PSF therefore depends on the lateral location in the image.

Within array-detector confocal systems, an array of multiple pinhole detectors replaces the conventional pinhole. Summed, they provide an increase in SNR but no resolution advantage. The improved resolution relative to traditional confocal imaging becomes apparent after specialized deconvolution.

The theoretical PSF is calculated based on model imaging conditions. In reality, all microscopy setups have some unique physical deviations that change the shape of the PSF. To correct for these setup specific aberrations, an experimental PSF, acquired from measurements on a particular imaging setup, should be used for deconvolution.

One can find the setup specific PSF from images of sub-resolution spherical beads since these will behave like point objects. Unlike true point objects, however, beads have a finite (non-zero) size. Therefore, rather than directly using bead images as PSFs, it is more accurate to first correct for the bead size. In addition, bead images contain photon noise while true PSFs do not. Hence, noise correction is also desirable when measuring a PSF.

More information on distilling PSFs can be found on the recording beads page. 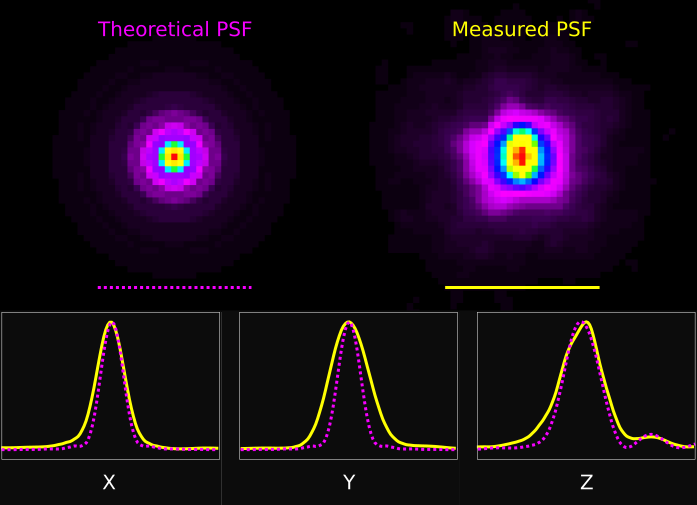 When discussing microscopy results, it is important to reflect on the quality of the used acquisition setup. This importance is, for example, illustrated by the formation and quick growth of the QUAREP-LiMi initiative. Any physical deviation of the microscope has consequences for the reproducibility of the images and is therefore important to assess. Doing so requires a consistent quality measure that is independent of the microscope type and brand. The experimental PSF is a valid example of such a measure as it shows how a point object is blurred by the used microscope. Comparison with the theoretical PSF reveals deviations from model imaging conditions and comparing different setups' PSFs reveals which one induces the strongest aberrations. These PSF comparisons can be done qualitatively, by visually inspecting the PSFs, or quantitatively, by comparing the full width at half maximum (FWHM) values.

The experimental PSF is a valid measure of the quality of a microscope, since comparison with the theoretical PSF will expose its physical deviations. Before imaging, it is therefore always recommended to measure the PSF, especially for new setups. If the measured PSF shows deviations from the ideal model, the microscopist can choose to either adjust the setup before image acquisition or to deconvolve the image with the measured PSF before further image processing.

Extra care should be taken when imaging with a strong refractive index mismatch, for example when using an oil immersion lens to image a watery sample. The PSF will then be different for different imaging depths, which is not accounted for when using a measured PSF. A theoretical PSF can be calculated in a depth-dependent way; in these cases, it is therefore recommended to optimize the imaging setup and subsequently deconvolve the acquired images with a depth-dependent theoretical PSF.


In the Huygens software

Huygens offers both deconvolution with a theoretical PSF, accurately calculated from the image parameters, and with a measured PSF, distilled from bead images using the Huygens PSF Distiller. The PSF is fed into the most advanced algorithms that currently exist to restore the image.

The Huygens Software uses advanced vector-based EM diffraction theory to generate the theoretical PSF, which can subsequently be used for deconvolution. The PSF generator algorithm is fully multi-threaded and can support even the largest PSFs. Huygens can generate PSFs for a wide range of microscopy types, including widefield, confocal, spinning disk, multi-photon, light sheet, STED, single-molecule localization, array detector, re-scan and 4Pi.

When the microscopy parameters are set correctly (automatically from the meta-data or manually by the user), the Huygens software automatically corrects for spherical aberration when deconvolving with a theoretical PSF. This is done by using different PSFs for different imaging depths. To compute these depth-dependent PSFs, the PSF generator uses the coverslip position, the imaging direction and the RI of the lens and embedding medium to generate a depth-dependent PSF. With the unique varPSF option, Huygens can even apply multiple varying PSFs simultaneously during each iteration in the MLE algorithms for even more accurate spherical aberration correction. 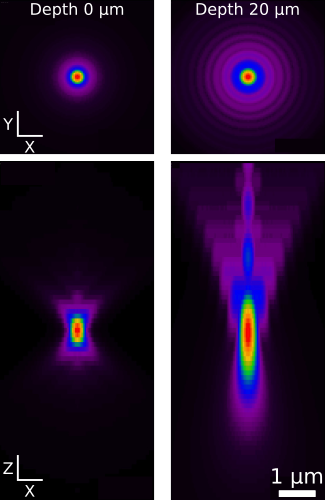