A pinhole is a small hole used in Confocal Microscopes at the image side of the lenses to get rid of out-of-focus light, thus allowing to record real 3D images.

The Huygens Deconvolution algorithms do not use the size of the physical pinhole. What is relevant to properly modelize the system (by calculating the Point Spread Function PSF) is the size of the image of the pinhole Back Projected on the sample. Throughout the Huygens Software pinhole sizes of Confocal Microscopes and Nipkow Disk Microscopes are specified as the backprojected radius in nanometers r_b.

Using the backprojected pinhole radius establishes an uniform reference and avoids all kind of complexities concerning the imaging setup of the different microscope models. From the point of view of the PSF what matters is the image of the pinhole on the sample, not how this projection is technically achieved. 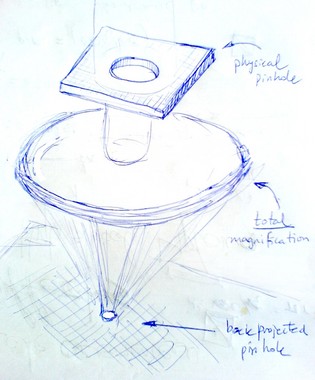 The equations that you can find in the Huygens Manuals for different microscopes are intended to orientate the user in finding out the backprojected value, but the idea is always the same: given the diameter of the real pinhole, we need some multiplying factor for unit conversion (to obtain the radius, not the diameter, in nm), and some dividing numbers that take account of the magnification of the microscope. These include both the objective and the intrinsic system magnification. In some microscopes with pinhole shapes other than circular, some geometrical correction may be also needed.

There is an online Backprojected Pinhole Calculator to assist you in finding the correct value for your setup.

Airy disk as unit for the backprojected pinhole

with N_Ad the number of Airy disks, NA the Numerical Aperture of the lens, and λ_ex the Excitation Wavelength. In principle using λ_ex is not correct because the Airy diffraction pattern is formed by the emitted light. However, we suspect microscope manufacturers prefer to use the Excitation Wavelength because it is better defined (it is monochromatic and has no spectrum like the Emission Wavelength) and does not depend on settings of devices like adjustable band filters. For this reason in the formula above we use λ_ex too.

Sometimes they even use a fixed reference wavelength!!! For example, Leica uses 580 nm in all the magnitudes measured in Airy units. This is something you need to know about your microscope.

(Note that this relation bypasses the need to know internal system and lens magnifications. You can combine Eq. 2 with Eq. 1 to obtain the physical size of the pinhole, given its size in Airy disk units, taking into account the magnification of the lenses).

A microscope may use different pinholes for different channels, to really take one Airy Disk (because the actual size of the Airy disk depends on the WaveLength of the radiation!!!), but many microscopes actually use just one pinhole, the same one for all channels. In this case, it is not longer true that exactly one Airy disk is taken for all the channels. Such a microscope usually reports NAd using a fixed λex as reference, not the actual one per channel.

Therefore to calculate a Theoretical Psf for Doing Deconvolution we need to know for what precise WaveLength is the pinhole designed. Moreover, the Refractive Index of the optical media is also relevant, because it changes the wavelength, so it is necessary to know if the manufacturer has taken this into account when giving the pinhole size. At the end, using Airy Disk units is not such a good idea, because it introduces a lot of uncertainty on what is really going on inside the microscope...

Search the FAQ for "pinhole".