A typical observation is that when one tries to deconvolve bead images using the Point Spread Function (PSF) distilled from them (see Recording Beads), the ideal spherical appearance is not restored. 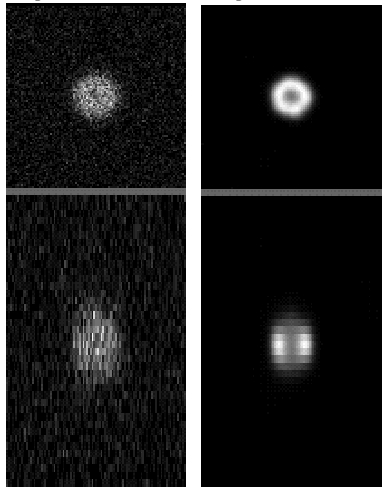 First of all, the above result would be expected only for beads larger than the recommended ones for distilling a PSF. For calibration (PSF distillation) purposes, Sub Resolution beads should be used and, when their properly sampled images are deconvolved, they should ideally provide a single VoXel!!!

If your image is sampled by voxels of 60×60×150 nm, a 250 nm diameter bead would look a bit smaller than 4x4x2 voxels once it is properly deconvolved!!! Don't expect a big sphere to appear...

The PSF has an aspect ratio of about 4/1. This means that a nearly SubResolution sphere is distorted in such a proportion along Z when measured; that's your loss of resolution. To restore the original situation, you need a ResolutionImprovement of a factor of 4 along Z. Even more, because if you gained some resolution in XY, let's say a 50 %, you will need another 50 % also along Z to recover the spherical aspect ratio, i.e. a boost factor of 6. That is a lot!!! Such a resolution improvement can only happen with a lot of risk of generating artifacts, for example by enhancing noise. It is possible: in HuygensProfessional you may find Restoration Methods (like the QMLE algorithm) that can restore the image a lot. But the results are more unpredictable with noisy images, and these are recommended only for almost noise free images.

But this effect in the aspect ratio of tiny objects does not translate similarly to larger ones!!! When you replace every subresolution voxel by that elongated prism, they will overlap each other when "building up" larger objects, and the final "error" is not so large.

Of course, you can also think in not correcting too much in XY to make the improvements in Z look better (more 1/1 final aspect ratio), but the aspect ratio is not what we want. The restoration looks for a ResolutionImprovement in all directions, as much as possible!!!

Another possible solution would be forcing the restoration including the constrain that the objects are SubResolution spheres. But this will only apply to this particular kind of images, and can not be used in a general RestorationMethod for all microscope images. Otherwise it would generate new objects that we do not know for sure that exist in the original, and that is not the purpose of ImageRestoration.

You can made tests by using, as a PSF for the deconvolution of your beads, both (A) an averaged bead and (B) a PSF distilled from it. Deconvolving some of your beads specially using (A) but also with (B), provides after many iterations objects that are almost punctual. (If you can, better use the QMLE algorithm, that for simple, not very noisy objects, provides very fast and reliable results).

After infinite iterations they should be the size of about one single voxel. That is, of course, the mathematically expected result from using (A), because an image deconvolved with itself is a single point. Deviations from this ideal result are caused by the experimental differences between a real bead and the average of all beads used as PSF (A). Using (B) provides images larger than a voxel, but not too much, providing that your calibration beads are close to the Sub Resolution ideal.

How things can be worse

Please keep in mind that in your images additional problems may affect the image; your results may be improves noticeably if those are addressed:

Huygens can correct to a certain extend confocal and multiphoton images for this. See Zdrift Correction.


Search the FAQ for "resolution gain".