All Huygens Products
New way to handle shape changing PSFs
The shape of PSFs suffering from spherical aberration due to refractive index mismatch is dependent of their depth position in the specimen. Previously this was solved by splitting the image into 'bricks', each with their own PSF. Though efficient, this could give rise to difficult to avoid gluing artifacts. With the new 'sub-brick' method, the Fast Fourier Transform (FFT) based convolution operations which are the heart of all deconvolution algorithms, are replaced by multiple FFTs, each with different PSFs. This new technique is available for the CMLE, QMLE and the new GMLE deconvolution algorithms.
GMLE
The GMLE algorithm is based on the Maximum a Posteriori probability estimation with Good's roughness regularization. It is related to our workhorse CMLE algorithm, but has rapid convergence like the QMLE algorithm. Using the newly developed sub-brick scheme, it is able to deal with shape changing PSFs without resorting to brick-wise processing.
GMLE is by default available for STED data. To use GMLE in the Deconvolution wizard for other imaging modalities 'Expert mode' needs to be switched on.

(E/P) Nikon ND2 file importer (Now in Essential and Professional. Expected to be in the HRM per January 2014). 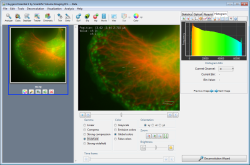 Bugs fixed in the Object Analyzer, deconvolution with many bricks, and others.

Bug fixed in estimating the background.

Many bugs were fixed in collaboration with users that kindly provided very valuable feedback (kudos to all!!!). For example:

Many bugs were fixed in collaboration with users that kindly provided very valuable feedback (kudos to all!!!). For example:

From this version, all Huygens Software is available for all platforms!!! That means that Huygens Professional is fully revised and is from this moment on also available for native Windows and MacOS X (currently only PowerPC, Intel expected soon). Huygens Essential is again further improved.


What was kept and improved

Among other minor bugs, the most noticeable fixes are:

The contents of previous releases are no longer listed